We are delighted to present you our 2nd stamp issue of 2022, which features our contribution to the 2022 SEPAC stamp edition. 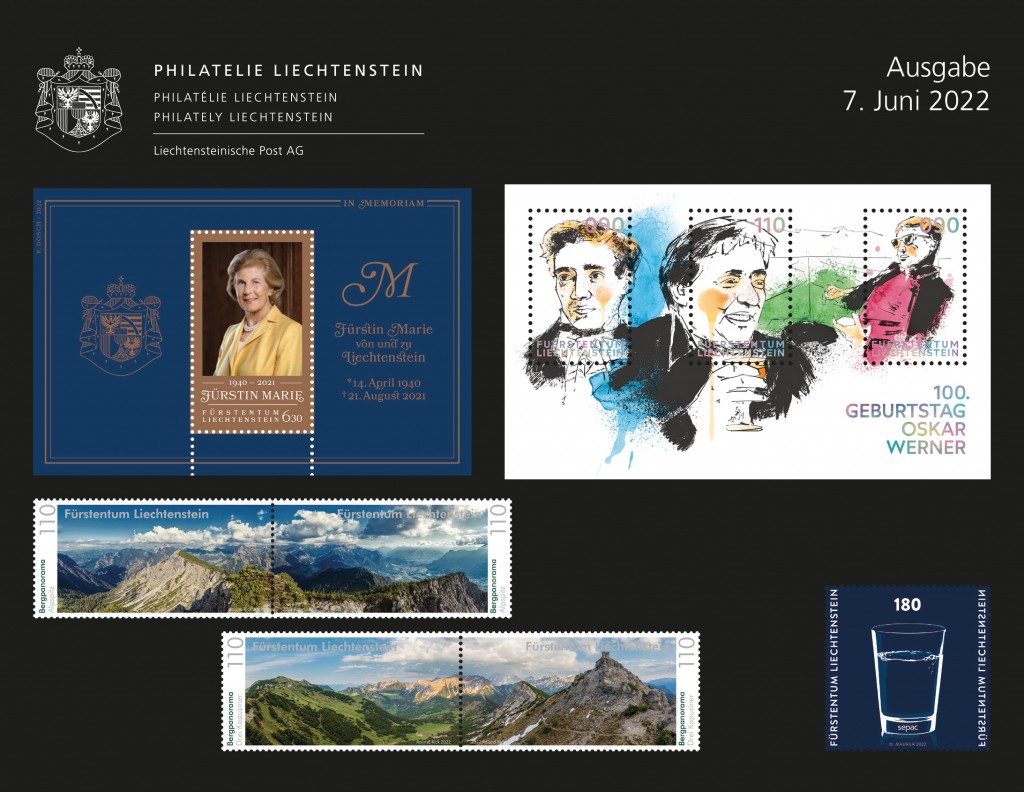 Breathtaking drone shots show previously unseen perspectives and fascinating views of the local alpine region on two new panorama special stamps. One of the motifs depicts the 1997-metre-high “Alpspitz” (left and right, face value: CHF 1.10 each) in the middle of the Rätikon mountain range.  On the summit, Liechtenstein’s oldest summit cross welcomes enthusiastic hikers and lovers of majestic views all year round. The area around the “Drei Kapuziner” (left and right, face value: CHF 1.10 each) is also a popular hiking area in Liechtenstein. Seen from Alp Guschg, the rocky peaks of the mountain are reminiscent of monks.

The joint stamp issue of the SEPAC countries focuses this year on local beverages from the member countries. Philately Liechtenstein chose its “Drinking Water” (face value: CHF 1.80). Although unimaginable for most people in many parts of the world, people in the Alps enjoy drinking top-quality fresh water straight from the tap. About half of the drinking water consumed each year is obtained from groundwater, the other half from spring water. 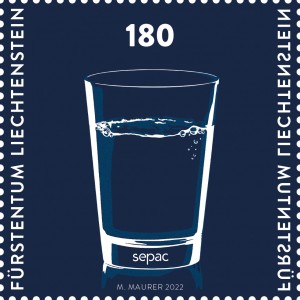 100th Anniversary of the Birthday of Oskar Werner

Oskar Werner, who lived in Liechtenstein during his lifetime, would have turned 100 this year. Three special stamps with illustrations of the artist, who was born in Vienna in 1922, celebrate his life and career.  Oskar Werner was already acting while he was still at school. As “The Actor” (face value: CHF 0.90) with a charismatic voice, Oskar Werner was engaged to play numerous film and theatre roles from 1938 to 1974. In 1952, “Oskar Werner” (face value: CHF 1.10) acquired a plot of land in the municipality of Triesen and built a house on it that enabled him to live a secluded life for many years. In line with his wishes, “The Private Person” (face value: CHF 0.90) Oskar Werner found his final resting place at the cemetery in Triesen.

In memoriam of Princess Marie of Liechtenstein

In August 2021, Liechtenstein bid farewell to its esteemed mother of the country. Princess Marie of Liechtenstein died aged 82 after suffering a stroke. Philately Liechtenstein now wishes to commemorate her life and work with a classy-looking souvenir sheet “H.S.H. Princess Marie” (face value: CHF 6.30). Born Countess Kinsky von Wchinitz und Tettau in Prague in 1940, Marie Aglaë grew up in Germany after her family fled the former Czechoslovakia. After marrying the then Hereditary Prince Hans-Adam II in 1967, she devoted herself entirely to her family before gradually taking on more representative tasks and becoming involved in social institutions for decades.

In addition to the souvenir sheet, an exclusive special issue will appear as a crypto stamp with blockchain technology, in which the viewer can learn more about the life and work of the Princess. The special issue “H.S.H. Princess Marie” (retail price: CHF 80.00) will be issued in a classy-looking folder with high-relief and foil embossing. The stamp sheet, finished in metallic copper colours, is embedded in fine velvet and shows the coat of arms of the principality as well as the initial “M” next to the portrait of the Princess. With this special issue, Philately is paying its last respects to H.S.H. Princess Marie and honouring her social commitment in Liechtenstein and beyond its borders.

The new stamps will be available from 7 June and can be pre-ordered now: www.philatelie.li/en/website/