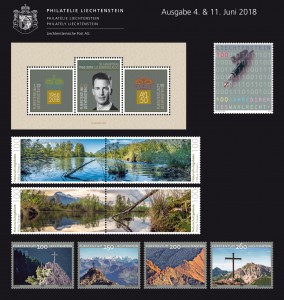 Through the stamp entitled “100 Years of Direct Suffrage” (face value: CHF 1.00), Philately Liechtenstein is commemorating this important democratic step in 1918. Prior to 1918, foreign heads of government governed the country and the Landtag, Liechtenstein’s parliament, was composed of indirectly elected members and members appointed by the reigning princes. At that time, the people called for a democratic constitution to be drawn up, for participation in government and for the direct election of members of the Landtag.

With a fourth and last part, the Philately is completing its popular special stamp series on nature reserves in Liechtenstein. The two panoramic views of “Spring” and “Summer” taken in Hälos in Triesen were split down the middle, producing four stamps worth CHF 1.00 each. Hälos is the largest continuous pond landscape of the country. The area is considered an important resting place for the grey heron and a brooding place and habitat for many other bird species. Besides being an important spawning ground for amphibians, this has again served as a home to beavers since 2012.

Four special stamps with breathtaking views of Liechtenstein’s mountain landscape are continuing the “Summit Crosses” series. To the north-west of Sass, the two rock columns that form the “Kelchle” (fact value: CHF 1.00) rise to 1,914 metres above sea level. The “Mittlerspitz” (face value: CHF 2.00) owes its name to its position between Mittagsspitz and Rotspitz and the “Hubel” (face value: CHF 2.60) is a mountain ridge located in the high valley of Malbun. The folded layers of rock at “Kläusli” (fact value: CHF 1.50) similarly present a fascinating sight. The stamp also serves as Liechtenstein’s SEPAC stamp this year on the theme of “Spectacular views”.

To celebrate the 50th birthday of H.S.H. Hereditary Prince Alois of Liechtenstein, a classy-looking souvenir sheet is appearing on 11 June with the three stamps “Green Princely Hat” (face value:

The new stamps are available from 4 and 11 June 2018: www.philatelie.li