Guernsey Post is delighted to announce the launch of Clematis Gold, a new miniature sheet series depicting award-winning clematis, which have been cultivated by world renowned nurseryman and Guernsey grower, Raymond Evison OBE. Each of the clematis depicted on the stamps has been part of the Gold Medal award-winning displays at the RHS Chelsea Flower Show, the world’s most prestigious horticultural event.

Beautifully depicted by botanical artist Gillian Barlow, the first miniature sheet depicts the Sarah Elizabeth clematis, which was created in memory of Sarah Elizabeth Groves, whose life was tragically cut short when she was murdered whilst backpacking, on board a houseboat on Dal Lake, Srinagar, Kashmir, on 6 April 2013. Sarah was just 24 years of age.

Raymond Evison said: – “Clematis Sarah Elizabeth was bred and developed as part of the Evison (R) and Poulsen (R) Breeding Programme, in the Guernsey-based clematis nursery over a period of approximately 10 years.

“The Sarah Elizabeth is a breakthrough as regards its flower colour, being a unique shade of pink to any other clematis plant on the market. Its stunning prominent anthers reminds one of Sarah’s delightful, naturally long eyelashes, which was behind the selection process of the variety to be named after Sarah, as well as its cheery brightly coloured sepals.”

Bridget Yabsley, head of philatelic at Guernsey Post said: – “Having most recently collaborated with Raymond in 2013 for our 25 Years of Gold stamp products, we are delighted to be working with him once again for our Clematis Gold series, which we anticipate will comprise six miniature sheets over the coming years.”

The stamps and related products are available to pre-order from 3 February 2021 at www.guernseystamps.com or by calling Philatelic Customer Services on +44 (0) 1481 716486. 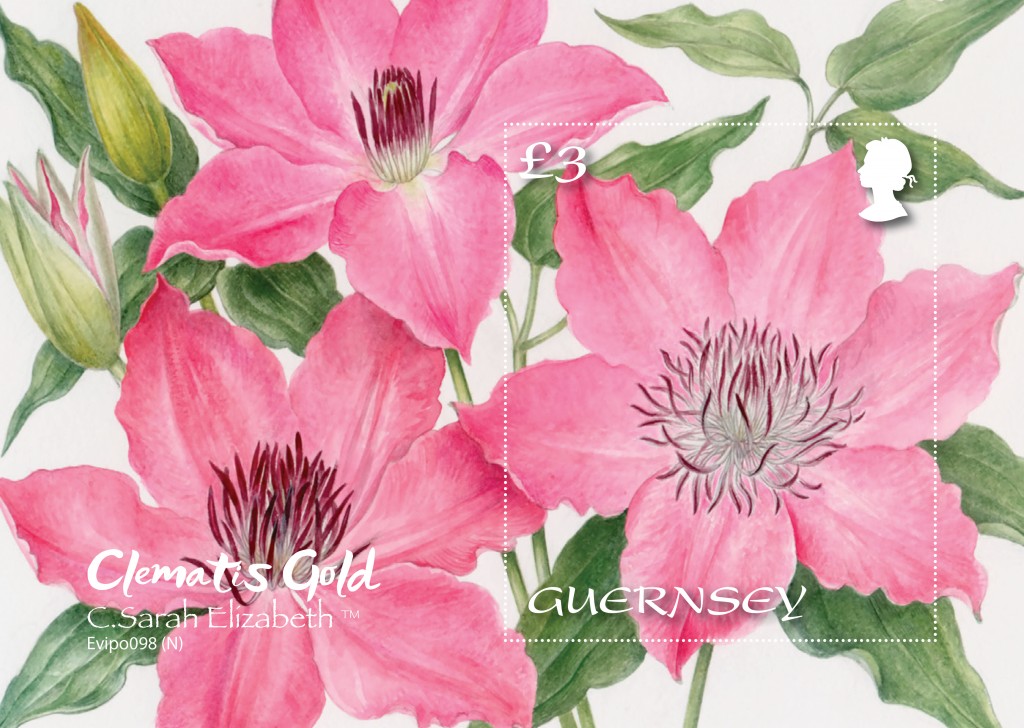