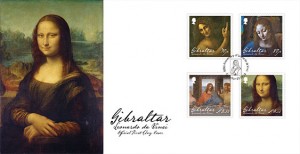 Leonardo da Vinci was an Italian polymath of the Renaissance period. Many historians and scholars regard Leonardo as the prime exemplar of the Universal Genius. He is also widely considered as one of the most diversely talented individuals to have ever lived.

2019 sees the 500th anniversary of the death of Leonardo and Gibraltar pays tribute to him with the release of a set of four stamps. The stamps have been designed by Gibraltarian graphics artist Mr Stephen Perera and depict the following masterpieces;

The stamps and related philatelic products are available for purchase on www.gibraltar-stamps.com