Guernsey Post’s philatelic bureau announces that it will release the fourth and final stamp to mark the 250th anniversary of the birth of Ludwig Van Beethoven, considered to be one of the most influential composers of all time.

The full set of four stamps, which have been issued on separate dates throughout the year, is available as a souvenir sheet, along with a presentation pack and a prestige booklet (issue date: 28 October 2020).

The final stamp, which will also be released 28 October, features a bust of Beethoven by the German sculptor Hugo Hagen. The bust is based on a life mask by Franz Klein, completed in 1812 when Beethoven was 42, which can be seen in the Beethoven Museum in Vienna.

Bridget Yabsley, head of philatelic at Guernsey Post said: – “We are delighted to mark the 250th anniversary of Beethoven’s birth with our commemorative stamp products. He is considered by many to be an innovator who oversaw the transition of music from the Classical style, full of grace and balance, to the Romantic style, characterised by emotion and power.”

The final stamp and products are available to pre-order from 14th October 2020 at www.guernseystamps.com or by calling Philatelic Customer Services on +44 (0) 1481 716486 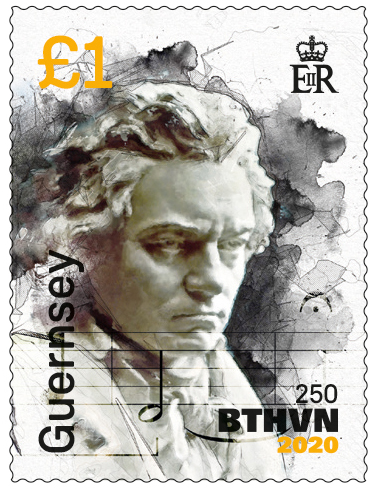