Guernsey Post is delighted to announce that it will issue stamp products, including a miniature sheet, to celebrate the occasion of the forthcoming marriage of Prince Harry and Ms. Meghan Markle on 19thMay 2018 (issue date: 2 May).

Bridget Yabsley, head of philatelic at Guernsey Post, said: – “We are delighted to celebrate the occasion of the marriage of Prince Harry and Meghan Markle with our stamps, which depict the couple in Kensington Palace’s Sunken Garden as they officially announced their engagement on 27thNovember 2017.”

His Royal Highness, the 33 year-old younger son of The Prince of Wales and Diana, Princess of Wales, will marry his 36 year-old American fiancée in St George’s Chapel in Windsor.

Prince Harry, who is fifth in line to the throne, was born Prince Henry Charles Albert David and was educated at Eton College. He spent a gap year working on a cattle station in Australia and in an orphanage in Lesotho. He then went on to train as an army officer at The Royal Military Academy Sandhurst.

The Prince conducted two tours of duty to Afghanistan with the British Army during his ten years of service. Since leaving active service in 2015 he has spent his working life supporting a number of charities and projects and carrying out public duties for the Queen.

Ms. Markle was born and raised in Los Angeles, California and graduated from Northwestern University in 2003 with a degree in theatre and international studies.

She is most famous for her role as Rachel Zane in the US legal drama Suits, but has also starred in the films ‘ Get Him to the Greek’, ‘Remember Me’ and ‘Horrible Bosses’. She has her own clothing line and until recently ran The Tig, a lifestyle website.

She went on to become a UN women’s advocate for Political Participation and Leadership and has campaigned for gender equality, publicly supporting actress Emma Watson’s He For She campaign.

She also became a Global Ambassador for World Vision Canada, the organisation set up to empower children, their families and their communities to overcome poverty and injustice. As part of her role she travelled to Rwanda to see the impact clean water has on the lives of the people there.

Once married, Ms. Markle will become the fourth patron of The Royal Foundation of The Duke and Duchess of Cambridge and Prince Harry, the charitable organisation set up to support causes close to their hearts.

The miniature sheet, first day cover and presentation pack are available to pre-order from 17 April by visiting www.guernseystamps.comor contacting Philatelic customer services on +44 (0) 1481 716486. 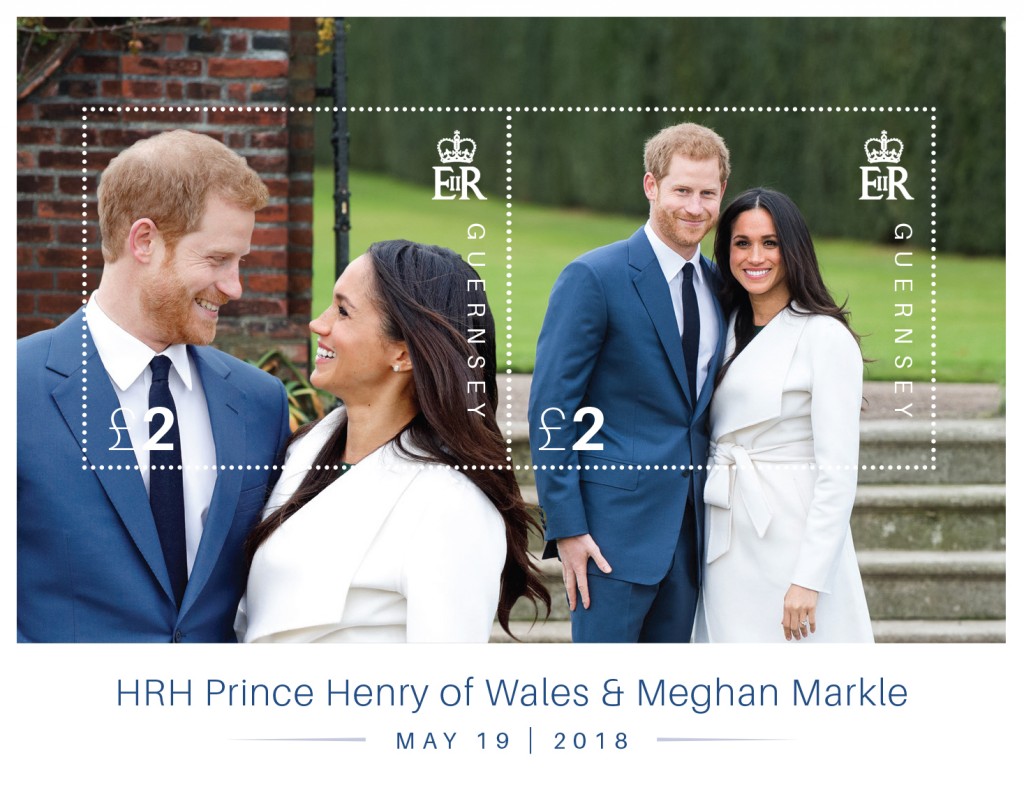