Home › Uncategorized › Jersey Post celebrates the Year of the Monkey 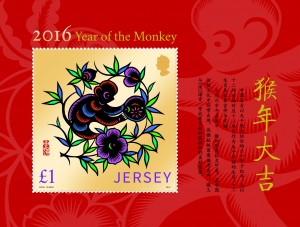 A stamp and a Miniature Sheet celebrating the start of the Lunar New Year will be issued by Jersey Post on 5 January 2016. The first in a new series, the stamps have been illustrated by China’s most loved stamp artist, Wang Huming, in Beijing, China and introduce the year of the monkey.

“The Lunar New Year, also known as Chinese New Year or the Spring Festival, is the most important celebration in the Chinese calendar and is celebrated by Chinese and ethnic communities around the world,” explains Melanie Gouzinis, Head of Philatelic at Jersey Post. “The Chinese animal zodiac is a repeating cycle of twelve years. Each of the twelve years is represented by an animal and 2016 is the year of the monkey.”

Chinese zodiac animals have symbolic meanings given to them by the ancient Chinese and people born in each animal’s year are said to have some of that animal’s personality. Those born in the year of the monkey are said to be smart, quick-witted, optimistic and ambitious. 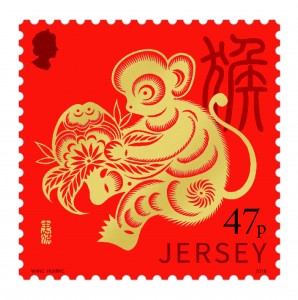 “The design Wang Huming has created for our Lunar New Year issue shows the monkey holding a peach and uses gold colours against a red background,” continues Mrs Gouzinis. “Whilst the peach is a symbol of long life in Chinese culture, red is considered the luckiest colour and is widely used during festivals. We are very fortunate to have worked together with such a high-profile artist as Wang Huming on this stamp issue as well as our Links with China issue released earlier this year.”

Jersey Post’s Lunar New Year stamps have been printed by Cartor Security Printing in France and feature a gold metallic ink and varnish. They will be available to buy from all branches of Jersey Post from 5 January 2016. Philatelic stamp products such as sets of stamps, Miniature Sheets, First Day Covers and Presentation Packs will be available from the Jersey post offices at Broad Street, St Helier and Rue Des Pres, St Saviour on issue day and can be ordered now at: www.jerseystamps.com or by phoning the Jersey Philatelic Bureau on: 00 44 (0)1534 516320.