King George V is the focus of a new stamp issue to be released by Jersey Post on 9 March 2016. The second issue in a series exploring the Royal legacy of Queen Victoria, the six stamps and Miniature Sheet feature portraits sourced from The National Portrait Gallery.

George V, Queen Victoria’s grandson, came to the throne on 6 May 1910 following the death of his father, Edward VII. Born on 3 June 1865, George started his career in the Royal Navy but found himself in line to the throne after the untimely death of his elder brother Prince Albert Victor, Duke of Clarence and Avondale.

The King’s reign was a turbulent time which saw the outbreak of the First World War. Throughout the War, the King made hundreds of visits to troops and military hospitals, visiting wounded servicemen. In 1917, with anti-German sentiment running high, George changed his Germanic family name to Windsor. 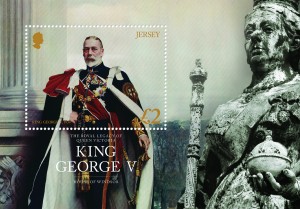 King George V was earnestly devoted to Britain and its Commonwealth and visited the island of Jersey on 12 July 1921. Rachel MacKenzie, Jersey Post’s Philatelic Marketing Manager comments: “At the time, he was only the second reigning monarch to pay an official Royal visit to the Island and it was this visit which occasioned the design of the Parish crests Jersey still uses today.”

King George was also an avid stamp collector and he played an important role in building the Royal Philatelic Collection into the world’s most comprehensive collection of postage stamps of Great Britain and the Commonwealth. Today his collection is housed in St James’ Palace in 328 red albums.

Jersey Post’s King George V stamps will be available to buy from all branches of Jersey Post from 9 March 2016. Philatelic stamp products such as sets of stamps, Miniature Sheets, First Day Covers and Presentation Packs will be available from the Jersey post offices at Broad Street, St Helier and Rue Des Pres, St Saviour on issue day and can be ordered now at: www.jerseystamps.com or by phoning the Jersey Philatelic Bureau on: 00 44 (0)1534 516320.