Surfing is the subject of a set of six stamps and a miniature sheet to be issued by Jersey Post on 18 May 2021.

The stamps feature contemporary images by Jersey photographers: Matt Porteous, Andy Le Gresley, BAM Perspectives and Richard Picot and show surfers enjoying the waves at Jersey’s ‘surfing mecca’, St Ouen’s Bay, on the west coast of the Island. The accompanying miniature sheet features an iconic black and white photograph taken by the late John Houiellebecq in 1959 as a record of the formation of the Jersey Surfboard Club, the oldest recognised surf club in Europe. Both the stamps and miniature sheet have been printed with a clear varnish in a wave pattern, which becomes visible when the stamps catch the light. 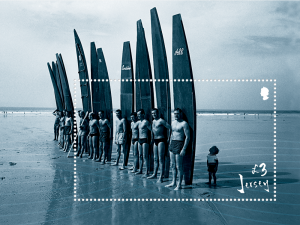 Jersey enjoys some of the best waves in the British Isles. The Atlantic swell and tidal shifts, along miles of sand, together with the warmest waters in Britain and picturesque scenery, make St. Ouen’s Bay the perfect place for surfing. It is no surprise then, that the Island has a rich history of surfing.

The Island Surf Club of Jersey, arguably Europe’s first surf club, was set up by islander Nigel Oxenden in 1923. The first surfers were bodyboarders and, whilst the sport has moved on, surfing in Jersey has kept its base around the Watersplash in St Ouen’s Bay where the club was originally started. Longboards were used in Jersey for the first time in the 1950s and, in 1959, the Jersey Surfboard Club, the oldest recognised surf club in Europe, was established. Since then, Jersey has hosted many major surfing championships, with some events in the 1960s attracting thousands of spectators. Today, Jersey remains home some to some of the best surfing beaches in Europe and the sport continues to be an important part of the Island’s culture.

Jersey Post’s Jersey Surfing stamps will be available to buy from all branches of Jersey Post from 18 May 2021. Philatelic stamp products such as miniature sheets, first day covers and presentation packs will be available from the Jersey post offices at Broad Street, St Helier and Rue Des Pres, St Saviour on issue day and can be ordered now at www.jerseystamps.com or by telephoning the Jersey Philatelic Bureau on: 00 44 (0)1534 616717.