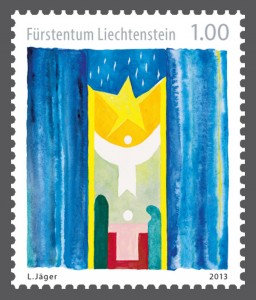 For the Christmas stamps which appear regularly in time for Advent the services of Liechtenstein’s arguably most important stamp designer have been retained this year: the “graphical pioneer” and artist Louis Jäger, born in 1930.

In 1960 Jäger, then a young graphic artist just 30 years of age who had trained in Munich, Berlin and elsewhere, designed his first stamp: Liechtenstein’s first Europa stamp. This stamp became famous for appearing in an edition of only 322,000 which sold out immediately and rapidly became a rarity among philatelists. And the name Louis Jäger was the talk of the entire country. 53 years and over 130 stamp designs later Louis Jäger made headlines again: in July 2013 the jubilee stamp designed by him “300 Years of the Liechtenstein Oberland“ was declared the world’s most beautiful stamp of 2012 in the international stamp competition “Premio Internazionale d’Arte Filatelica”. The “Christmas 2013” series of stamps depicts four scenes painted in watercolour from the traditional Christmas story familiar from the Gospels of St. Luke and St. Matthew. The brilliant yellow “Annunciation” stamp (face value CHF 0.85) tells of the Archangel Gabriel prophesying to Mary the birth of her son Jesus. This passage in the Bible is also the basis of the prayer “Ave Maria” (“Hail, Mary”). The blue stamp with a star at the centre shows the “Nativity” (face value CHF 1.00), in central Europe traditionally celebrated on Christmas Eve (24th December). Soft shades of green form the background for an angel’s annunciation of the birth of Christ to the “Shepherds and their flocks” (face value CHF 1.40). The image on the blue-and-yellow “Three Kings” stamp (face value CHF 1.90) is that of the Three Kings journeying to Christ’s crib from the East guided by a star. As for several years now in response to numerous customer requests, the stamps are again selfadhesive.