A special series of four stamps will illustrate  the traditions still celebrated in the Luxembourg Mosel region today. These stamps are be part of the annual “Charity stamps 2020”.

Another special series of charity stamps are the traditional Christmas stamps

Moreover, a special stamp will honor Grand Duke Henri’s 20th anniversary of accession to the throne.

Finally, the Postcollants E50g (stamps on rolls) show five of the more than 350 different wild bees one can find in Luxembourg.

The new stamp booklet presents the second series of local museums in Luxembourg. Join us on a journey through the Grand Duchy to discover the traditions of making various products, and in particular handicrafts.

In the footsteps of the miners of the 19th century, you first take the mine railway and then walk into the tunnels. The tools and machines on display in the underground galleries document more than a hundred years of technical development in iron ore mining.

This museum was established in 1999 with the support of the town of Wiltz and the Gambrinus fraternity. The exhibits illustrate the 6,000 years old history of beer production and document the development of the Luxembourg brewing industry.

From 1458 to 1914, Nospelt was the centre of the Luxembourg pottery industry. In the house of the last potter of Nospelt, a museum has been set up where visitors are initiated into the secrets of this old craft and can admire old pottery on display.

The Mohrfelsmühle was a grain mill until 100 years ago, then a mustard factory until 32 years ago. In the educational experience room, everything related to mustard, mills, nutrition, waterpower and the role of the miller is explained and the history of the “Muerbelsmillen” is presented.

A weaving guild existed in Esch-sur-Sûre in the 16th century already. With the invention of the first wool machines, the original cloth factory was set up. In the museum, visitors can experience how wool is processed to cloth on the restored machines. 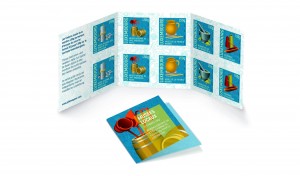 The third part of the series deals with customs that are still celebrated in the Luxembourg Moselle region today.

We begin in Grevenmacher with the Coronation of the Wine Queen, which takes place every year on the second weekend in September. In the time prior to her coronation, each queen represented Luxembourg’s wines and viticulture as a wine princess for four years. Since 1950, the Wine Queen for the coming season has been chosen among the princesses at the Grape and Wine Festival.

The tour continues to Ehnen to the “Confrérie St. Cunibert”, which was originally founded on 6 May 1967 in the Stadtbredimus castle. Since 2012, the wine fraternity has been very active again. It contributes to the image of the Moselle wine region and Luxembourg’s wine and promotes wine as part of Luxembourg’s culture. Cunibert, the fraternity’s patron saint, was born at the end of the 6th century in Remich and is also the patron saint of the town. The Mosel-Franconian nobleman studied theology, became bishop of Cologne and is considered a charitable benefactor.

Another tradition in Remich is the burning of the “Stréimännchen” (straw figure), which is an integral part of the calendar: On Ash Wednesday, this tradition serves to drive away the winter. The straw figure is carried in a procession through the streets of Remich, burnt on the Moselle bridge and then thrown into the river. In leap years it is always a female figure.

To end off, we are welcomed by the inhabitants of Schwebsingen to their wine festival. The invitation is extended every year on the first Sunday in September – a tradition of almost 70 years. On this occasion the village well is transformed into a wine well, and the good wine delights all visitors. 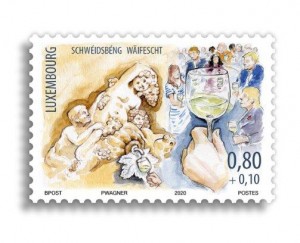 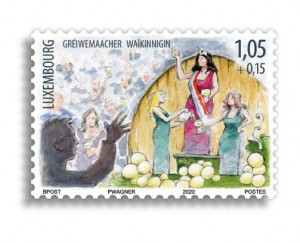 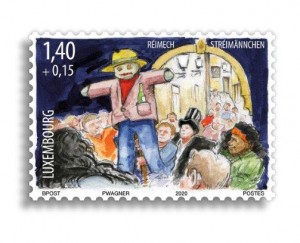 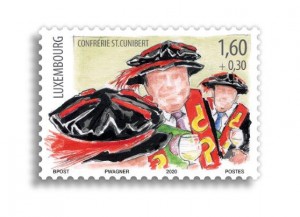 Anticipation is the most beautiful joy, and this also applies to the days and weeks that precede the celebrations at the end of the year.

A walk in the snow, a visit to the Christmas market, a toboggan race or building a snowman… there are many special things that bring us joy at this time of year and have become habits we love.

Marie-Isabelle Callier, who designed and drew this year’s special stamps, creates – in addition to her work as a painter – children’s books in which she uses her illustrations to tell everyday stories, but often also historical and cultural stories.

Her passion is reflected in the motifs in a lively, atmospheric, natural and yet enchanting way.

The artist lives and works in Luxembourg. “It was very important to me to show places in the city of Luxembourg that I particularly like and that for me make the magic of Christmas”, says Marie-Isabelle Callier. 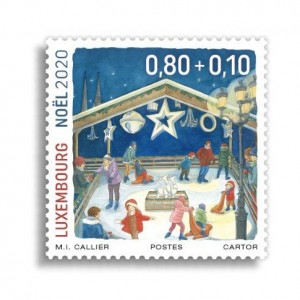 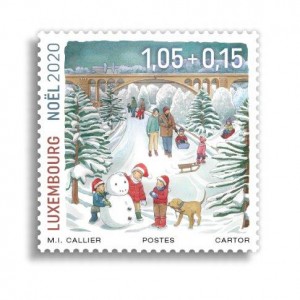 Grand Duke Henri’s 20th anniversary of accession to the throne

In 2020 Grand Duke Henri is celebrating his 20th anniversary of accession to the throne. He is the sixth monarch of the Nassau-Weilburg dynasty since Adolphe of Nassau.

After his father, Grand Duke Jean, appointed him “Lieutenant-Représentant” on 4 March 1998, Henri became Grand Duke of Luxembourg on 7 October 2000.

The 20 years of his reign have been characterised above all by his closeness to the people and his active commitment to Luxembourg in many areas. Together with Grand Duchess Maria Teresa and their five children Guillaume, Félix, Louis, Alexandra and Sébastien, he is committed to social, humanitarian, economic, environmental, cultural and sporting causes, both in Luxembourg and internationally. Whether as a member of the IOC, on an economic mission, on a state visit or as a host at the Grand-Ducal Palace, Grand Duke Henri knows how to perform his duties not only at a high level, but also always in a warm and cordial manner.

The monarch also displays these qualities as a father and grandfather. The Grand-Ducal couple are delighted to have five grandchildren, including, since this year, the next but one heir to the throne, Prince Charles, son of Hereditary Grand Duke Guillaume and Hereditary Grand Duchess Stéphanie. 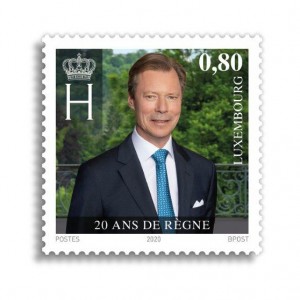 There are about 350 wild bee species in Luxembourg. In contrast to the farmed honeybee, they do not build up a stock of honey. They usually live alone and are much less prone to defend themselves by stinging. The bumble bees are an exception to this solitary life.

Together with honeybees, wild bees need the pollen of flowers to supply their larvae. Some species are specialists and can only feed on very specific flowers, making the preservation of plant diversity essential for their survival. At the same time, wild bees suffer from the fact that their typical habitats are disappearing, making it increasingly difficult for them to find sites for their hives. As these insects are important pollinators for a large number of plants, their protection and the preservation of their food sources and habitat is particularly important.