Luxembourg new stamp issues in May 2015

With a minisheet of six stamps dedicated to the celebration of the 70th anniversary of the end of the Second World War POST Luxembourg honors the victims of the terrible conflict between nations. Six talented artists created strong  visuals to illustrate the theme. With the “Personalities” series Post Luxembourg pays tribute to men who deeply impacted Luxembourg’s society. The old toys on the “Europa” stamps invite you to come and see them in real in the “A Possen” museum in Bech-Kleinmacher. With these stamps philately is documenting and promoting the Luxembourgish identity.

The Second World War, and in particular the German occupation, left a deep-seated mark on Luxembourg society. It was an era of great turmoil which, far from marking a parenthesis in history, was not limited to war narratives or atrocities committed by man against man.

Continuing to speak about it means, first  and foremost, continuing an historical work, followed by a process of recalling events.

Today, as the witnesses depart this world, it is more important than ever to convey these memories to young people in our communities who, all too often, fall prey to ‘material values’, economic rewards, a rapidly changing world and to the superficiality of human relationships.

Therefore, POST Luxembourg, together with the Centre for Documentation and Research on Forced Enrolment and backed by the Ministry of National Education, Childhood and Youth as well as the Ministry of Culture, took the initiative with this project, which is designed to pay tribute to the victims who perished in this unprecedented conflict and to encourage us to reflect on the future.

Stamps convey messages. We trust these images of the past will bear the most poignant words and symbolize the need to pass on our history and our memories to future generations. 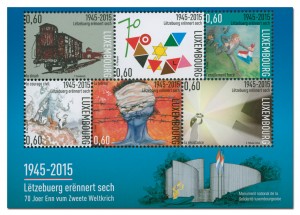 Claus Cito studied art at the School of Applied Arts and the Art Academy in Stuttgart, where he acquired in-depth knowledge and came into contact with Peter Berens, August Macke and the directors of the new theatre Gustav Lindemann and Louise Dumont.

Enthralled by the Social Realism of Constantin Meunier, Cito settled in Brussels in 1909.

Having won the “Monument du Souvenir” competition, he returned to Bascharage in 1922 in order to set up his own small business in a workshop. He took part in the “Cercle artistique” and “Secession” exhibitions and started to receive his first private commissions. During the 1930s, his small company continued to develop and orders poured in: Cito and his three colleagues, Emile Goedgen, Aloyse Weins and Aurelio Sabatini, received 28 orders for  bigger public works before the Second World War brought the business to an abrupt end.

Robert Kriebs was born in Dalheim on 15 October 1922. He attended Bonnevoie Primary School and the “Lycée classique” in Diekirch.

In May 1941, he was expelled from the lycée for resisting the political pressure being applied by the German occupying forces. In October 1941, he joined a resistance movement, was arrested with his father in November of the same year and imprisoned in Hinzert, then in Luxembourg Grund, and subsequently sent back to Hinzert.

Robert Krieps was finally deported to the concentration camps in Natzweiler and Dachau and was liberated in April 1945.

He went back to school to finish his secondary education, then studied law at the “Cours supérieurs” in Luxembourg and university in Nancy until 1948.

While practising as a lawyer, he married Renée Ketter in August 1950; she bore him three sons (Bob, Alex and Tom) and a daughter (Michèle).

Robert Krieps launched his political career by joining the socialist party in 1948. Elected communal adviser of the City of Luxembourg in 1963, he became a member of Parliament in June 1964. He unsuccessfully sought re-election in 1968, but returned to the Chamber in 1974, and was Minister for Justice, National Education and Culture in a centre-left coalition (DP-LSAP) from 1974 to 1979.

After leaving primary school, René Engelmann attended Diekirch secondary school. From 1899 to 1903, he studied Latin, Romanticism, German and English at university in Paris and Berlin. He spent 1903 in Berlin and Basle. From 1905 to 1906, he was sent by the Luxembourg government to London to study. As one of the first English teachers in Luxembourg, Engelmann taught at Diekirch secondary school. He took his own life at the age of 34.

Engelmann made his name with works dealing with the Luxembourg language, such as his discourses “Vokalismus der Viandener Mundart” and “Vorschläge zur Regelung der luxemburgischen Rechtschreibung”, the latter became well known as “Engelmann-Weltersche Rechtschreibung”.

Embark upon an amazing journey to the wonderful land of toys. For a moment of escape, the doors to childhood open again! You may find familiar toys, or THE toy that accompanied you your whole life.

Manufacture of the doll’s house dates back to 1936. At the age of 7, Madame Reuter from Pétange received the ‘house’ as a St Nicolas gift. The furniture had been made and painted by her father, a locksmith employed by the railway. Her mother had sewn all the household linen and the doll’s clothes by hand, paying scrupulous attention to the finest details. When war broke out in 1940, her family was forced to leave their home. Unfortunately, the toys had to be left behind, much to the little girl’s acute disappointment. The furniture was stored away in the attic of the family home in Pétange.

This building box, comprising model components in stone, was one of the magical gifts that a nursery school child in Hamm could choose at the end of a school year. As the unique moment approached, Anne Berwa, the teacher in Hamm, showed the class the objects they coveted so much. The delighted recipient of the famous ‘Baukasten aus Steen’ was a little boy.

This series of postage stamps featuring the toys of yesteryear was produced together with the ‘A Possen’ Museum in Bech-Kleinmacher where the doll’s house furniture and the building box are now on display. It’s a folklore, viticulture and toy museum housed in a row of old dwellings dating from the 17th century. Over 1,200 m2, the museum exhibits objects and toys from former times.