A special stamp will honor the most powerful electoral prince of the roman catholic empire of his time, “Peter of Aspelt” who was born in the small village of Aspelt in the county of Luxembourg. He demonstrated his

attachment to the House of Luxembourg on several occasions. The year 2020 marks the 700th anniversary of death.

Another special stamp will celebrate the 75 years of the United Nations Organisation of which Luxembourg is one of the founding members.

The 79th Luxembourg Day of the Stamp will this year be hosted by the Cercle Philatélique Ettelbruck. At this occasion a special stamp

Last but not least, for the joint issue of the SEPAC members 2020, POST Philately decided to cooperate with the Mudam  ( Musée d’Art Moderne Grand-Duc Jean).

The stamp shows the 2009 work “Many Spoken Words” by Luxembourg artist Su-Mei Tse.

This one will also be found in the joint folder which is published under the chosen theme of “Artwork in the National Collection”.

700th Anniversary of the death of Peter of Aspelt

When Peter of Aspelt died on 5 June 1320, after an impressive rise to power, he had already held the office of Archbishop of Mainz for 14 years and was one of the most powerful electoral princes of his time. With great political ambition and skill, the son of a simple non-aristocratic family became a kingmaker and a high-ranking diplomat at European level.

In the last years of his life, he demonstrated his attachment to the House of Luxembourg on two occasions: In 1308, he helped Henry VII ascend to the royal throne. In 1310, his son John (the Blind) married Elisabeth of Bohemia and the Luxembourg dynasty gained power in Bohemia.

Peter’s presence is of course very much felt in the Luxembourg municipality of Aspelt. It is thanks to his work that the name Aspelt became known far beyond the borders. Peter of Aspelt is an integral part of the municipality’s cultural heritage, and those responsible are keen to preserve his memory and his achievements. On the occasion of the 700th anniversary of his death, a new Peter of Aspelt statue was commissioned, which will be ceremonially inaugurated as part of the exhibition and event programme that has been postponed to 2021 due to the COVID-19 pandemic. 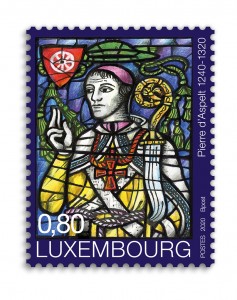 By the end of the Second World War in 1945, the importance of peace under international law took on a new significance. In this context, 50 states met at the San Francisco Conference in June 1945 to establish the United Nations (UN) or United Nations Organization (UNO). Initiatives were already under way for a smaller-scale alliance after the First World War.

Since its foundation, the UN has been a forum for defusing conflicts in the world through peaceful means and multilateral exchange, for seeking joint solutions and promoting human rights.

Luxembourg in the UNO

Luxembourg is one of the founding members of the United Nations and has assumed responsibility at the highest level on several occasions over the years (Gaston Thorn served as President of the General Assembly in 1975, and Luxembourg was elected to the Security Council for the 2013/14 period).

The motif of the stamp depicts the sculpture by Swedish artist Carl Fredrik Reuterswärd, titled “Non Violence”. It was a gift from Luxembourg to the UN, and stands in front of the UN headquarters in New York. A second original was erected at the European Court of Justice in Luxembourg-City. 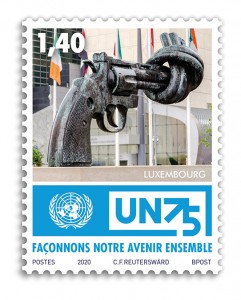 This year, the Cercle Philatélique Ettelbruck is hosting the 79th Luxembourg Stamp Day.

Ettelbruck is located in the north of Luxembourg and is one of the five municipalities that form the core of the “Nordstad” development pole. It was first mentioned in writing in 901. With its 9,145 inhabitants, Ettelbruck is the largest municipality in the Canton of Diekirch and has a long tradition as a shopping town.

The blue railway bridge depicted on the special stamp is located near the Ettelbrück railway station, which is an important junction in the Luxembourg railway traffic network. The bridge was constructed in 2012 and crosses the Alzette River, which regularly spills its banks during floods and inundates the surrounding urban area. A big advantage of the new tied arch bridge is the omission of intermediate piers, which allows the water to flow better, especially in flood situations. At the same time, the new construction is 80 cm higher than the old bridge.

The railway bridge is prominent in Ettelbruck’s townscape, which is dominated by the Alzette valley, and is therefore depicted – albeit in a very abstract way – in the town’s logo.

SEPAC – Artwork in the National Collection

For the joint issue of the SEPAC members 2020, POST Philately decided to cooperate with the Mudam Luxembourg – Musée d’Art Moderne Grand-Duc Jean under the theme “Artwork in the National Collection”. The 2009 work, Many Spoken Words, by Luxembourg artist Su-Mei Tse (born 1973), which forms part of the museum’s collection, was selected. In 2003, Su-Mei Tse was awarded the Golden Lion on behalf of the Luxembourg pavilion at the Venice Biennale.

Many Spoken Words symbolizes “the process of language, from the original idea to the spoken and written word” (Su-Mei Tse).

The work is a homage to literature, the poetry of words, creativity. The image, constantly changing due to the flow of black ink, combines with the tonal elements and thus evokes numerous impressions, and awakens thoughts and feelings in the viewer. The simple forms of the pseudobaroque garden fountain form an exciting and inspiring contrast with the variety of possible associations of each individual.

Many Spoken Words is installed in one of the generously proportioned rooms of the Mudam, where the characteristic glass roof of the museum creates a unique connection between the interior and exterior space. 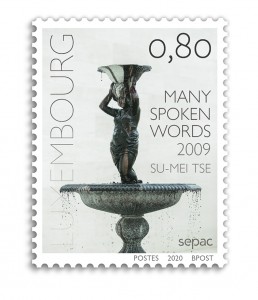