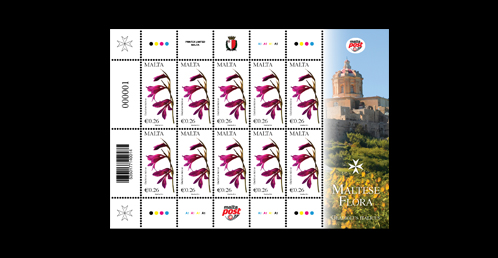 The stamps carry a face value of €0.26, €0.59 and €1.16 and respectively depict the Field Gladiolus, the Wavy Leaf Mullein and the Conical Orchid. The Field Gladiolus is a common plant occurring mainly in March and April. The Wavy Leaf Mullein is commonly seen growing on disturbed ground and flowers in late May and early June. The Conical Orchid which is one of the more frequently found orchids of the Maltese Islands, flowers in January and February and occurs mainly in garrigue habitats, rocky terrain as well as clearings in shrub lands.