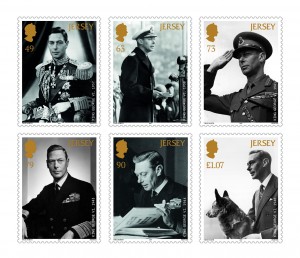 King George VI is the subject of a new stamp issue to be released by Jersey Post on Friday 12 May 2017. The fourth issue in a series exploring the Royal Legacy of Queen Victoria, the six stamps and Miniature Sheet feature photographs taken during the King’s reign.

George VI, great grandson to Queen Victoria and father to Queen Elizabeth II, came to the throne on 11 December 1936, following the abdication of his brother, King Edward VIII. The King is perhaps best known for his strength and courage in leading the country through World War II. King George VI and his family remained at Buckingham Palace throughout the War, despite the Palace being damaged by bombing and it was during the war years that the King introduced The George Cross, a mark of honour created to acknowledge ‘acts of the greatest heroism or of the most conspicuous courage in circumstances of extreme danger.’

“The images which appear on this set of six stamps are presented chronologically and include a photograph of King George VI in his coronation year and another showing the King making his famous speech inaugurating the Empire Exhibition in 1938,” explains Rachel MacKenzie, Philatelic Marketing Manager at Jersey Post. “Two more relaxed images show the King perusing his stamp collection and posing with one of the family dogs. The Miniature Sheet features an iconic photograph of King George VI making a radio broadcast to the nation in 1939, after the outbreak of World War II.” 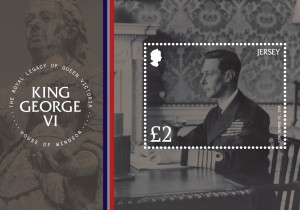 Jersey Post’s King George VI stamps will be available to buy from all branches of Jersey Post from 12 May 2017. Philatelic stamp products such as First Day Covers and Presentation Packs will be available from the Jersey post offices at Broad Street, St Helier and Rue Des Pres, St Saviour on issue day and can be ordered now at www.jerseystamps.com or by telephoning the Jersey Philatelic Bureau on: 00 44 (0)1534 516320.