Home › Uncategorized › The Birth of Formula One – 75 Years

The Birth of Formula One – 75 Years

Jersey Post will release ten stamps on 1 September 2021, celebrating the Birth of Formula One 75 years ago. Specifically dedicating itself to the ten British drivers that have achieved the ultimate accolade of World Champion, award-winning artist Keith Burns’ fabulously dynamic artwork features each of these champions of the sport duelling with their rivals. These ten stamps and two miniature sheets are in a two-part series: 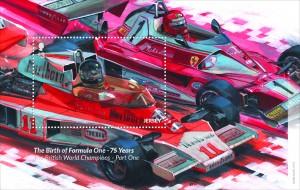 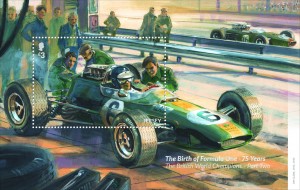 Keith Burns, the artist, said about the illustrated stamps, “Working on this project has been an absolute dream come true. I’ve always been obsessed with cars, especially racing cars. They embody technical excellence and a pursuit for speed and handling that has much in common with my usual field of aviation. The approach is the same – to try to capture the same kinetic energy and drama through story-telling and human involvement. As an avid fan of motorsport, it has been a real treat to research in-depth the cars and British World Champions of the last 75 years.”

As well as First Day Covers, Presentation Packs and art prints, there is also a coffee-table style art book available, featuring 20 of Keith Burns’ illustrations from throughout the issue. Written by motorsport journalist Joe Saward, it includes a foreword by 1992 Formula One World Champion Nigel Mansell.

Jersey Post’s The Birth of Formula One – 75 years, The British World Champions stamps will be available to buy from all branches of Jersey Post from 1 September 2021. Philatelic stamp products such as Miniature Sheets, Souvenir Sheetlets, First Day Covers and Presentation Packs will be available from the Jersey post offices at Broad Street, St Helier and Rue Des Pres, St Saviour on issue day and can be ordered now at www.jerseystamps.com Alternatively, you can email the Jersey Philatelic Bureau at stamps@jerseypost.com or telephone us: +44 (0)1534 616717.