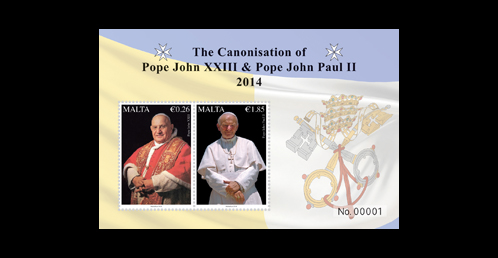 The stamps carry a face value of €0.26 and €1.85 and portray the images of Pope John XXIII and Pope John Paul II respectively.

John XXIII was elected Pope on 28 October 1958 following the death of Pope Pius XII. His pontificate lasted five years and is remembered as gentle yet enterprising and courageous. His tenure was characterised by visits to the imprisoned and the sick. During his term he brought together the Roman Synod, established the Commission for the Revision of the Code of Canon Law and summoned the Second Vatican Council.

John Paul II was elected Pope on 16 October 1978. Many remember this Pope as a warm and charismatic personality who brought positive changes to the Catholic Church. During his term he made over 100 pastoral visits outside Italy and numerous ones within Italy. He held more meetings with leaders of nations and members of other churches than any of his predecessors.

The stamps have been designed by MaltaPost and was issued within a miniature sheet format. Each stamp measures 44mm x 31mm with a perforation of 13.9 x 14.0 (comb.) while the miniature sheet measures 120mm x 80mm. The Malta stamps bear the Maltese Crosses watermark. The print run, by Printex Ltd consists of 40,000 sheets.