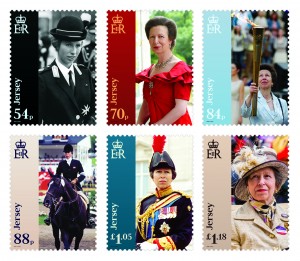 The 70th birthday of HRH The Princess Royal will be celebrated with a set of six stamps and a miniature sheet to be issued by Jersey Post on 15 August 2020, the Princess’ birthday. The stamps feature photographs of Her Royal Highness at notable events throughout the decades.

The Princess Royal has one of the busiest working schedules of all the Royal family members, devoting a large part of her working life to official engagements and visits. Her Royal Highness has built relationships with many organisations and charities, including Save the Children, of which she became patron in 2016, after serving as President since 1970. The Princess Royal is also known for her keen interest in horsemanship; her equestrian career saw her compete in the 1976 Montreal Olympic Games and Her Royal Highness became President of Riding for the Disabled (RDA) in 1985.

“The photographs used across the stamps have been carefully chosen to reflect the Princess’ tireless charitable work and devotion to her royal duties, as well as her equestrian career,” explains Angela Hamon, Philatelic Research and Marketing Executive at Jersey Post. “The miniature sheet which accompanies the set shows HRH Princess Anne riding her horse, Goodwill, during the showjumping section of the European Eventing Championship at Luhmühlen, in September 1975.” 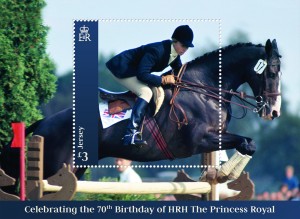 The Princess Royal has visited Jersey on a number of occasions as part of her charitable works. In 1988, she visited the Island to take part in a charity horse racing event at Les Landes racecourse for Riding for the Disabled Jersey. Her Royal Highness is also the Patron of Jersey’s Durrell Wildlife Conservation Trust and has attended several of the charity’s events including the opening of the Gaherty Reptile Breeding Centre in October 1976, the opening of the International Training Centre in October 1984, the Trust’s 50th Anniversary ‘Firefly Ball’ in July 2009 and the opening of the new visitor centre in 2011.

Jersey Post’s HRH The Princess Royal’s 70th Birthday stamps will be available to buy from branches of Jersey Post from 15 August 2020. Philatelic stamp products such as miniature sheets, first day covers and presentation packs will be available from the Jersey post offices at Broad Street, St Helier and Rue Des Pres, St Saviour on issue day and can be ordered now at www.jerseystamps.com or by telephoning the Jersey Philatelic Bureau on: 00 44 (0)1534 616717.