On 15 February 2023, 150 years have passed since the birth of Carl Björkman. One of the leading figures of the Åland movement advocating a reunification with Sweden, he can also be attributed the title “architect of the autonomy”. Åland Post celebrates the anniversary with a portrait stamp.

Born in Turku in 1873, Carl Björkman trained as a lawyer in Helsinki. In 1903, he settled in Åland when he got the position as police chief on island of Föglö.  His political commitment to Åland began in 1905 during the Finnish general strike, when he was elected vice-chairman of the Åland general strike committee. From having no ties to Åland, he soon became one of the leaders of the Åland society together with Julius Sundblom.

Carl Björkman played a significant role in the Åland Movement. Among other things, he organized the petitions for a reunification with Sweden and convinced the Swedish king to send protective troops to Åland during the Finnish Civil War. In 1922, following the decision on autonomy for Åland by the League of Nations, Björkman was elected to the first Åland parliament and appointed Premier. As Head of the new provincial government, which consisted of five members, he had to tackle the mammoth task of establishing the administration and legislative processes for the autonomy. Not only did he lay the foundations for the forms of autonomy regarding the relationship between the provincial government and the parliament of Finland, but also for the relationship between Åland and the Finnish authorities. Björkman was twice re-elected as Premier. In 1938, he had to resign after a vote of no confidence due to a dissenting opinion regarding the protection and defence of Åland neutrality. Carl Björkman died on 5 September 1948. 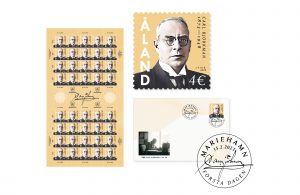