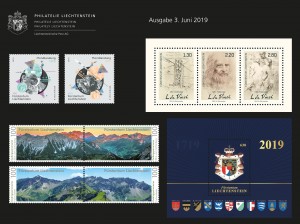 Fifty years ago, on 21 July 1969, two astronauts walked on the moon for the first time in human history. Philately Liechtenstein is issuing the two commemorative stamps “Astronaut” (face value: CHF 1.80) and “Lunar Lander” (face value: CHF 2.00) to mark the anniversary. Mission Apollo 11 took off  in Florida on 16 July 1969 with Neil Armstrong, Edwin “Buzz” Aldrin and Michael Collins on board and reached the moon’s orbit 76 hours later. Armstrong and Aldrin landed the lunar module on the moon the next day. A few hours later Neil Armstrong was the first out of a total of 12 humans to walk on the moon.

500th Anniversary of the Death of Leonardo da Vinci

The 500th anniversary of the death of one of the most famous universal scholars of all time is being commemorated in 2019. The Italian Leonardo da Vinci went down in history as a painter, sculptor and architect as well as a mechanic, engineer, anatomist and natural philosopher. The special block commemorating the anniversary of his death, consisting of three stamps with the drawings “Flying Machine” (face value: CHF 1.30), “Self-Portrait” (face value: CHF 2.20) and “Anatomic Studies” (face value: CHF 2.80), gives an idea of da Vinci’s extensive and visionary work.

To mark the 300th anniversary of the Principality of Liechtenstein, Philately Liechtenstein is issuing the “Grand National Coat of Arms” (face value: CHF 6.30) as a special stamp for the third time in history. For the production of the six-colour special block, every possible step was taken in terms of printing technology: blind embossing, hot foil embossing in gold as well as UV varnishing and iridescent colours give the issue its exclusive look. The grand national coat of arms is identical to the coat of arms of the Princely House of Liechtenstein and was introduced on 4 June 1957. It contains six motifs on the origin and history of the noble family.

Impressive mountain panoramas are replacing the popular series of special stamps on the nature reserves in Liechtenstein. The current motifs also emerged as winners of the Fotoclub Spektral photo competition with many competitors. Like their predecessors, the two panoramic views were divided in the middle, creating four stamps. The special “Mountain Summer” stamp (left and right, face value: CHF 1.00 each) depicts the impressive Falknis mountain range while the “Sunrise” photograph (left and right, face value: CHF 1.00 each) provides a fantastic view from Schönberg.

The new stamps are available from Philately Liechtenstein from 3 June 2019. www.philatelie.li