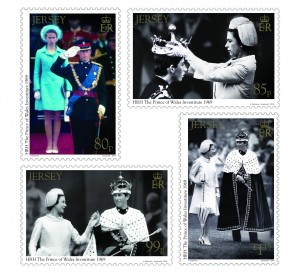 Four stamps and a Miniature Sheet commemorating 50 years since the investiture of HRH The Prince of Wales are to be issued by Jersey Post on 1 July 2019. Designed by Andrew Robinson, the stamps feature photographs taken during the Prince’s investiture ceremony in 1969.

HRH Prince Charles was created the Prince of Wales on July 26th 1958, at the age of nine. However his mother, HM Queen Elizabeth II, decided Prince Charles should not be invested until he truly understood the weight of his responsibility as Prince of Wales. On 1st July 1969, at the age of 20, and after learning the Welsh language and studying Welsh culture, Prince Charles was invested at Caernarfon Castle. The investiture took place behind the medieval walls of the castle, with over 4,000 guests in attendance. Thousands more were in the dry moat outside the castle and millions around the world watched on television. 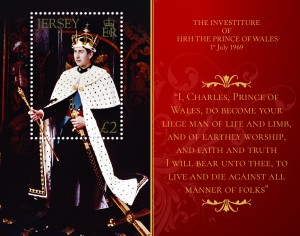 Jersey Post’s The Investiture of HRH The Prince of Wales 1st July 1969 stamps will be available to buy from all branches of Jersey Post from 1 July 2019. Philatelic stamp products such as Miniature Sheets, First Day Covers and Presentation Packs will be available from the Jersey post offices at Broad Street, St Helier and Rue Des Pres, St Saviour on issue day and can be ordered now at www.jerseystamps.com Alternatively, you can email the Jersey Philatelic Bureau at stamps@jerseypost.com or telephone us on: +44(0) 1534 616717.