Guernsey Post is delighted to announce the release of the second miniature sheet in its Clematis Gold series, which depicts clematis cultivated by world renowned nurseryman and Guernsey grower, Raymond Evison OBE.

Each clematis in the series, including the latest flower, Samaritan Jo, has been part of the Gold Medal winning displays at the RHS Chelsea Flower Show, the world’s most prestigious horticultural event (stamp issue date: 9 February 2022).

Depicted by botanical artist Gillian Barlow, Clematis Samaritan Jo was launched at the Chelsea Flower Show in 2013 by Raymond and Felicity Varah Harding, daughter of The Reverend Chad Varah CH CBE, who, in 1953, founded the Samaritans charity, the world’s first crisis hotline to provide telephone support to those contemplating suicide.

Raymond Evison said: – “Clematis Samaritan Jo has the most delightfully coloured flowers, which have a minimum of six pointed sepals and are flushed a mauve pink. Each sepal has a  pink and purple edge, which gives the flower a distinct appearance. The centre of the flower is also strikingly different having golden yellow anthers and purple filaments.

“As with all clematis that are part of this breeding programme, it has taken between eight and 10 years from pollination to achieve this variety.”

Bridget Yabsley, head of philatelic at Guernsey Post said: – “We are thrilled with the second stamp in our Clematis Gold series, which has one again been beautifully depicted by Gillian Barlow. It is a pleasure to be collaborating with Raymond Evison on this stamp series, which we anticipate will comprise another four miniature sheets over the coming years.”

The stamps and related products are available to pre-order now at www.guernseystamps.com or by calling Philatelic Customer Services on +44 (0) 1481 716486. 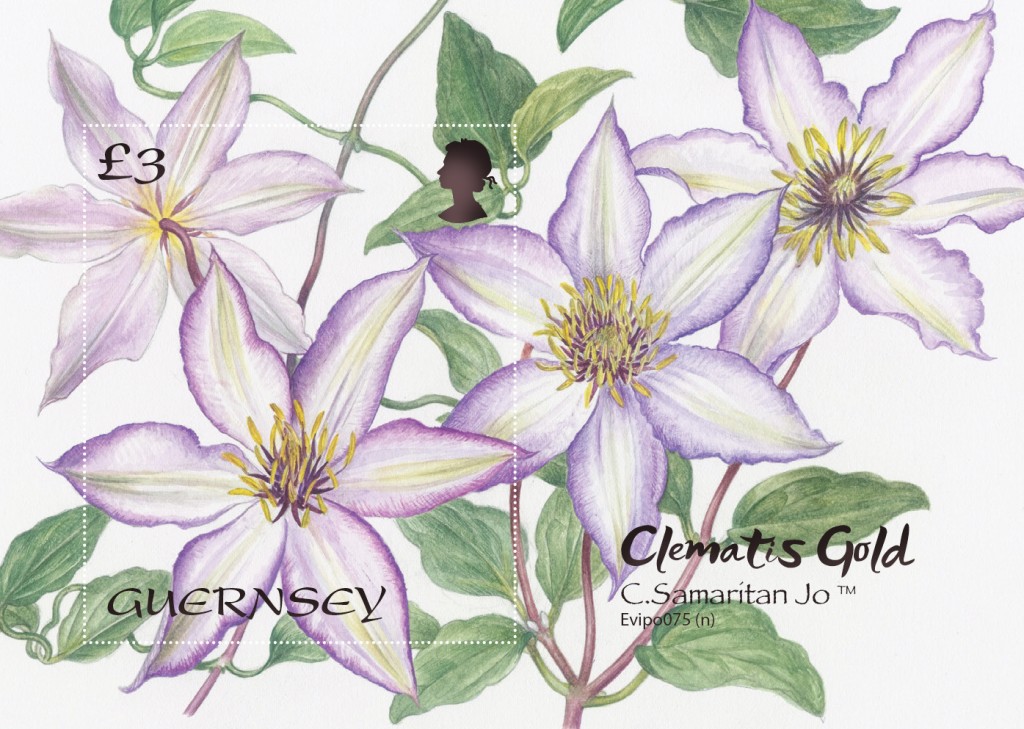