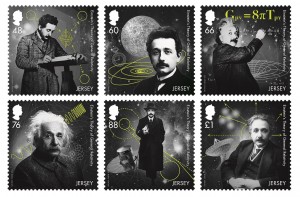 Six stamps and a Miniature Sheet commemorating 100 years since Albert Einstein published his ground-breaking paper on the theory of general relativity will be issued by Jersey Post on 11 May 2016.

Melanie Gouzinis, Jersey Post’s Head of Philatelic explains: “Einstein is the embodiment of genius, eccentricity and free-thinking and has had a colossal impact on science and technology of the 20th and 21st centuries. It is so exciting to think that 100 years since he published his paper, as we have seen in the news recently with the proof of the existence of gravitational waves, he continues to inspire scientists, philosophers and students around the world.”

The paper is considered to be one of the towering achievements of 20th century physics, introducing the concept that the force of gravity can in fact be described in geometrical terms as the curvature of space-time. His theory of general relativity, built upon his previously published theory of special relativity, explains the motion of galaxies, the physics of black holes and the bending of light from distant stars and galaxies.

The stamps have been designed by Hat-Trick Design (London) Ltd, featuring iconic photographs of Einstein with background detail alluding to aspects of his work. As a nod to the association of Einstein with blackboard-written equations, the Miniature Sheet has been designed with a chalk portrait of the scientist with one of his well-known playful facial expressions. 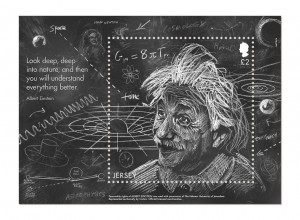 Gareth Howatt, Creative Director at Hat-Trick, added: “Einstein has often been shown working on a blackboard, so we thought it would be interesting to take it one stage further and combine his portrait with some of his theories on one surface.”

The Einstein stamps will be available to buy from all branches of Jersey Post from 11 May 2016. Philatelic stamp products such as sets of stamps, Souvenir Sheetlets, Miniature Sheets, First Day Covers and Presentation Packs will be available from the Jersey post offices at Broad Street, St Helier and Rue Des Pres, St Saviour on issue day and can be ordered now at: www.jerseystamps.com or by phoning the Jersey Philatelic Bureau on: 00 44 (0)1534 516320.

A special version of the Miniature Sheet, and associated products, overprinted with the show logo from the forthcoming New York World Stamp Show will be available from 28 May 2016.