In January 2012, a new stamp series was launched to show the unique beauty of Icelandic nature.

We like to call them „tourist stamps“, not only because they are a great means to show the whole world the pristine beauty of our country, but also because of their format: indeed, these stamps are especially designed to fit on a postcard and leave enough space for the text not to be covered with the cancellation stamp 🙂

The first two stamps of the series came out in January 2012. They depict the Landmannalaugar area – an area better known for its natural hot spings and rhyolite mountains – and Hnausapollur, east of the volcano Hekla. 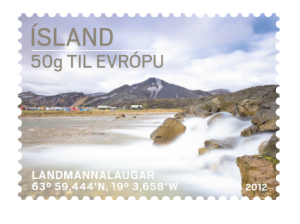 Both are unique and very popular destinations of the highlands of Iceland. The roads there only open in early Summer when the soil becomes dry again after the snow has thawed; they usually close again in the Autumn.

The second series, issued in January 2013, show Aldeyjarfoss and Hafursey. Aldeyjarfoss is a 20 meters high waterfall framed in beautiful basalt formations in the Skjálfandi River in Bárðardalur, not far from the no-less famous Goðafoss. Hafursey is a tuff mountain in northern Mýrdalssandur. 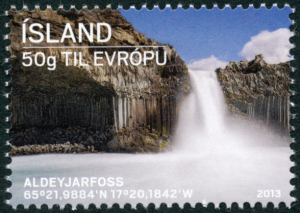 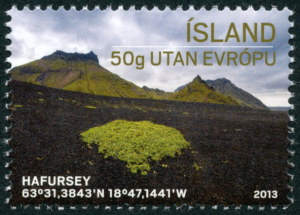 The third stamps in the series came out last January and represent Sjálfberg,  a peculiar rock formation standing in the sea on the coast at Munaðarnes in the Westfjords of Iceland, and the Kvíar Glacier, a glacial tongue which runs from Öræfajökull in the southernmost part of Vatnajökull glacier, the largest ice cap in Europe. 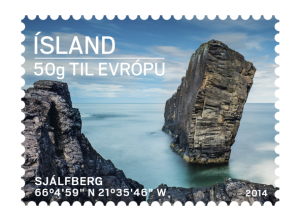 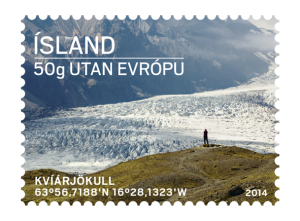 You can find all of these stamps on our website