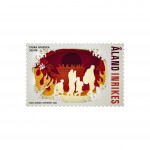 On 7 May, Åland Post commemorates the 300th anniversary of the Great Northern War, one of the worst disasters to strike Åland. The majority of the Åland population fled and, for eight years, Åland lay desolate. The stamp visualizes the mass exodus and the homecoming after the peace in 1721. Åland designer Carl-Johan Listherby created the stamp: “The creative challenge was to produce a story in multiple steps, but in one illustration.”

With Finland already conquered in the summer of 1714, Russia attacked Åland in August. The attack was not unexpected. Sweden had been at war against Denmark-Norway, Poland-Saxony and Russia since 1700. Consequently, Åland was already on a war footing. Still, most Ålanders was at home to salvage the harvest, but they now fled by the skin of their teeth across the sea. Stories told by refugees from Finland, passing on their flight to Sweden, created great fear of the enemy. Most refugees ended up in the Stockholm and Lake Malar archipelagos. Those settling by the coast could make a living from fishing and seal hunting, but many suffered great hardship during their stay in Sweden.

Peace was finally made in 1721, and most islanders returned in the following spring. Heavy work lay head; overgrown fields and meadows, stolen or feral cattle, houses burnt to the ground, demolished or in ruins. Only towards the end of the 1700s did Åland again have the same population as prior to the Great Northern War.

Commenting on the design of the stamp and his use of paper silhouettes, artist Carl-Johan Listherby says: “I made different attempts involving mirroring and rotations before I thought of letting layers of depth move the story within the image. Once I’d thought of it, I realized that paper, and the natural thickness of various types of paper, was a suitable technique for this particular idea.” 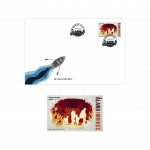