According to the Chinese zodiac, the Year of the Tiger ranks third among the 12 animals of the zodiac.  It begins on 1 February 2022 at the start of the Spring Festival and lasts until 21 January 2023.

Bridget Yabsley, head of philatelic at Guernsey Post said: – “Chrissy has created another wonderful set of stamps for our Chinese New Year series. The detailed designs feature red as the primary colour, which, according to Chinese culture, symbolises good fortune and joy, and is often seen in celebrations like Chinese New Year. The touches of gold represent wealth, prosperity and happiness, whilst adding a luxurious feel.”

On the Stretching Tiger stamp, the tiger’s body depicts a square and scroll pattern inspired by Chinese ceramics, to represent never-ending fortune. The tiger holds an orange between its paws, which is an auspicious symbol during Chinese New Year and represents gold and wealth.

Coins are often displayed during the Spring Festival to attract wealth and the Coin Tiger  stamp depicts the creature in a playful pose with a gold coin between its paws. The tiger’s body is adorned with a fire pattern to symbolise intellectual brilliance.

On the Longevity Tiger stamp,  the creature displays an endless knot. Its body features a plum blossom design, which reflects the coming of Spring, along with hopes of prosperity.

The tiger’s body is decorated with a chrysanthemum pattern on the Lantern Dreams stamp to symbolise longevity. A Chinese lantern hangs from its tail and displays the word ‘fu’, meaning fortune, which is commonly displayed during Chinese New Year.

On Tiger Mum with Cub, the mother’s body is decorated with a peony pattern, which represents wealth and advancement in life.

During Chinese Spring Festival, red packets, known as hongbao, are filled with money and given to children, which are depicted on the Hongbao Tigers stamp.

The stamp products are available to pre-order from 5th January 2022 at www.guernseystamps.com or by calling Philatelic Customer Services on +44 (0) 1481 716486. 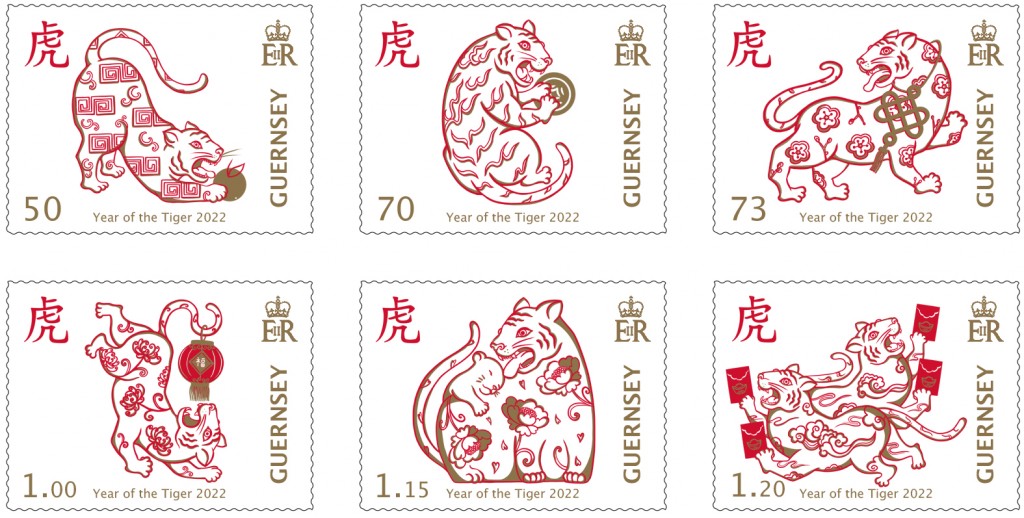