Guernsey Post’s philatelic bureau is delighted to mark the 175th anniversary of the construction of Alderney’s harbour breakwater with a set of commemorative stamps and souvenir sheet.

Alderney’s breakwater, one of the island’s key landmarks, was designed by Victorian engineer Thomas Jackson who had carried out various railway and canal works during the previous ten years. It is thought that Alderney presented Jackson with the greatest challenge of his career: the island provided only sand and stone, meaning that all other material had to be imported, and there was no accommodation for the workers.

Alderney’s fortification began in earnest in the 1850s when the British Admiralty felt increasingly threatened by the strong French naval base at Cherbourg. In the years that followed, 18 forts and batteries were built to protect Alderney and the ‘harbour of refuge and observation’, which was intended to provide a base for the British fleet against any potential invasion by the French.

Preparatory work commenced in 1847 and by 1856 the breakwater had reached 2,700 feet (823m) from the shore. Construction of the wall then ceased until 1860, although rubble for the bank continued to be placed. In 1864 the breakwater was 4,800 feet (1,463m), although about a third of it was destroyed in storms shortly after its completion and it wasn’t rebuilt.

In 2018, Alderney’s Breakwater was named one of the top 200 most influential engineering projects in the world, being highlighted by the Institution of Civil Engineers (ICE) on its 200th anniversary as an example of a project which has shaped the world and transformed lives.

Bridget Yabsley, head of philatelic at Guernsey Post, said: – “We are delighted to commemorate the 175thanniversary of the Alderney Breakwater, which, despite the harsh weather it faces every year, continues to provide shelter to the island and boats in Braye Harbour.”

The stamp products are available to order at www.guernseystamps.com or by calling Philatelic Customer Services on +44 (0) 1481 716486. 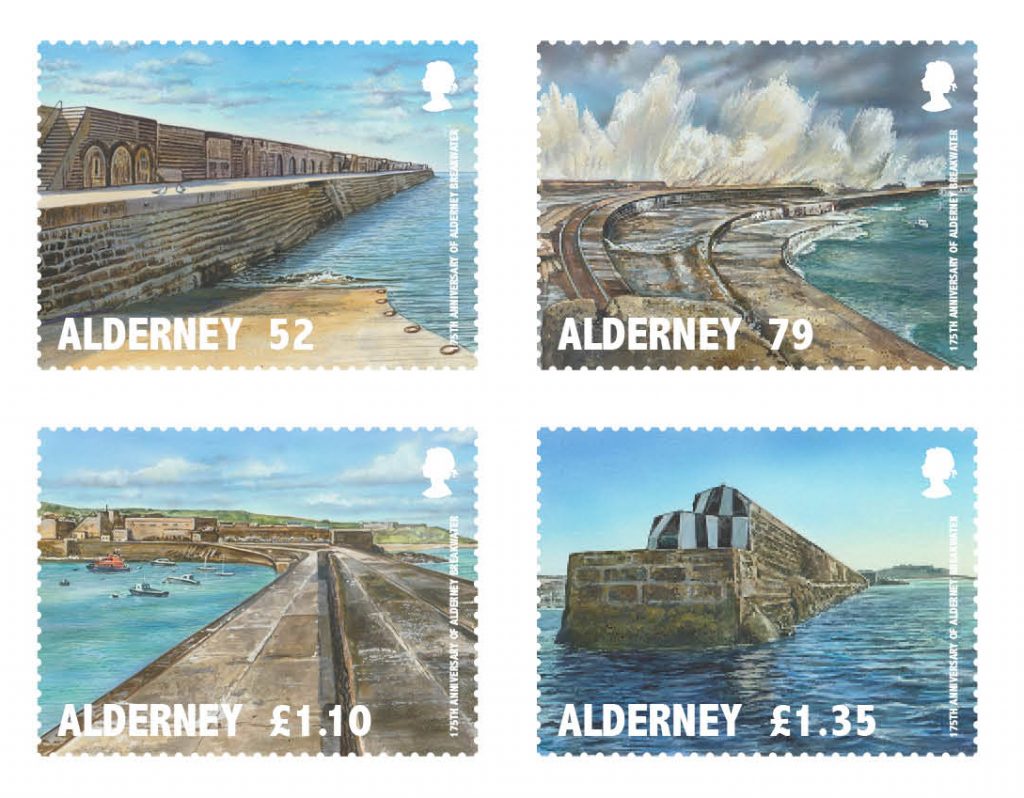