Home › Uncategorized › His Royal Highness, Prince Philip to be commemorated with Jersey stamps

His Royal Highness, Prince Philip to be commemorated with Jersey stamps 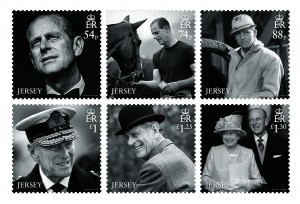 Jersey Post will issue a set of six commemorative stamps on 6 July 2021 celebrating the life and achievements of His Royal Highness, Prince Philip, it has announced. Britain’s longest serving royal consort, The Duke of Edinburgh passed away at Windsor Castle on 9 April at the age of 99. Prince Philip dedicated his life to royal duty and was famously described by Her Majesty The Queen as her “strength and stay”.

“The Duke of Edinburgh served the Crown and Britain dutifully for decades and we are honoured to be able to pay tribute to his life of service through these commemorative stamps,” comments Tim Brown, Jersey Post’s Chief Executive Officer.

Designed by Osborne Ross Design, the stamps feature a stunning selection of black and grey duotone printed photographs, highlighting some of the many facets of His Royal Highness and celebrating his life and loyal years of service to the Crown, the people of Britain and the Commonwealth for over seventy years. Featured across the six stamps are strikingly informal portrayals of His Royal Highness as a global ambassador, horseman, supporter of industry, military dignitary, sportsman and royal consort.

Throughout his long and illustrious life, The Duke of Edinburgh was patron and supporter of more than 780 organisations, attending thousands of charity engagements and visits. His Royal Highness made royal visits to Jersey on several occasions, the first being in 1949.

Entitled HRH The Prince Philip, Duke of Edinburgh: A Life of Service, the stamp issue will be available to buy from all branches of Jersey Post from 6 July 2021. Philatelic stamp products such as first day covers and presentation packs will be available from the Jersey post offices at Broad Street, St Helier and Rue Des Pres, St Saviour on issue day and can be ordered now at www.jerseystamps.com or by telephoning the Jersey Philatelic Bureau on: 00 44 (0)1534 616717.