Jersey stamps commemorate the aircraft of the First World War

Six stamps and a Miniature Sheet commemorating the events of World War I will be issued by Jersey Post on 4 August 2017. The fourth in a five part series entitled The Great War – 100 Years, this penultimate issue focuses on War in the Air and features aircraft flown by the squadrons of Britain, France, Germany and the United States in the fast developing air war between 1914 and 1918.

The First World War was the first major conflict to involve large-scale use of aircraft in combat. Powered flight was still in its infancy; the Wright brothers’ first flight had only been achieved 11 years previously, and in 1914 the aircraft were still flimsy and very primitive. However, such was the rapid development of their use, by the end of the war in 1918, their potential had become indispensable to modern warfare.

“The pilots themselves soon became dashing cultural icons,” explains Chris Elligott, Philatelic Production Coordinator at Jersey Post, “and stories of dramatic dogfights were perfect for distracting public attention away from the mud, horror and destruction of the trenches. Although air power had a relatively small influence in the outcome of the First World War, the development of aircraft, from fragile reconnaissance machines to powerful weapons, represented a huge stepping stone to the significance of air power in subsequent conflicts.”

Illustrated by Russell Smith, the six stamps depict: a Sopwith Camel, an Airco. DH.2 engaged with an Albatros D.II, a French Nieuport 16 outnumbered by German Fokker Eindeckers, a Fokker Dr. 1 Triplane, a Sopwith Triplane and a quartet of USAAS Nieuport 28s. The Miniature Sheet, which accompanies the set, features an Airco DH.2 of Royal Flying Corps 32 Squadron being manoeuvred by ground crew based at Vert Galand aerodrome in northern France, one of the best known British aerodromes on the Western front. 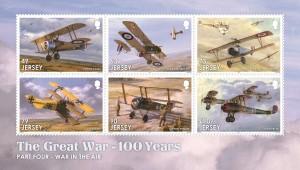 The War in the Air stamps will be available to buy from all branches of Jersey Post from 4 August 2017. Philatelic stamp products such as sets of stamps, Miniature Sheets, Souvenir Sheets, First Day Covers and Presentation Packs will be available from the Jersey post offices at Broad Street, St Helier and Rue Des Pres, St Saviour on issue day and can be ordered now at: www.jerseystamps.com or by phoning the Jersey Philatelic Bureau on: 00 44 (0)1534 516320.