Six stamps, a Miniature Sheet and a Souvenir Sheetlet will be issued by Jersey Post on Tuesday 4 August, commemorating the events of World War I. The second in a five part series entitled, ‘The Great War – 100 Years’, this issue focuses on the idea of change, exploring just some of the areas that experienced rapid development during the period 1914-1918.

“The Great War was the first conflict to embrace the need for dramatic change in order to achieve the upper hand”, explains Chris Elligott, Jersey Post’s Philatelic Production Co-Ordinator. “Artist Chris Ede has effectively portrayed some of these changes across the six stamps, using sepia tones to depict the ‘before’ and contrasting bold, vibrant colours to illustrate the ‘after’. Represented on the stamps are: mechanisation, advancements in communication, developments in camouflage and deception, new styles of uniforms, improved methods of observation and changes in war tactics.” 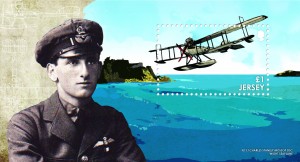 Accompanying the set of six stamps is a striking Miniature Sheet which features an illustration of Jerseyman, Flt Lt Charles Stanley Mossop DSC. In 1917, whilst operating off the French coast, Mossop became the first man to sink an enemy submarine from the air, an action for which he was awarded the Distinguished Service Cross. In August 1918, he also became the first Jerseyman to land a plane in the Island, quite literally bringing one of World War I’s developments home to Jersey. Tragically, Mossop was killed in a flying accident in France two days later. Victoria College in Jersey has kindly given permission for Jersey Post to reproduce his portrait from their World War I Book of Remembrance.

The stamps will be available to buy from all branches of Jersey Post from 4 August 2015. Philatelic stamp products such as sets of stamps, First Day Covers and Presentation Packs will be available from the main post office at Broad Street, St Helier, Jersey, on issue day and can be ordered now at: www.jerseystamps.com or by phoning the Jersey Philatelic Bureau on: 00 44 (0)1534 516320.