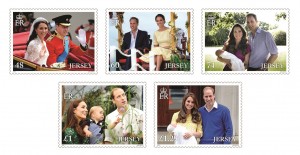 A set of five stamps and a Miniature Sheet will be released by Jersey Post on 29 April 2016 to celebrate the 5th Wedding Anniversary of Their Royal Highnesses The Duke and Duchess of Cambridge. The stamps feature photographs which capture key milestones from each year of the Royal Couple’s married life.

“The Duke and Duchess of Cambridge’s first five years of marriage have seen them embark on a number of overseas tours as well as having two beautiful children, Prince George and Princess Charlotte,” comments Rachel MacKenzie, Philatelic Marketing Manager at Jersey Post. “We are extremely fortunate to have been given permission to use some wonderful photographs for this stamp issue, capturing several of these happy events. Of particular note is the stunning family portrait by Mario Testino which features on the Miniature Sheet.” 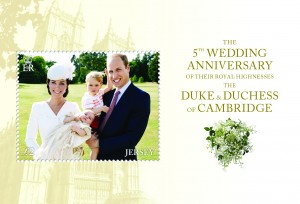 The Miniature Sheet features one of four official photographs released by Kensington Palace following Princess Charlotte’s christening and shows The Duke and Duchess with their two children in the garden at Sandringham House. Westminster Abbey, where the Duke and Duchess were married, can be seen in the background surround together with an image of the Duchess’ wedding bouquet which was made using Lily of the Valley, Sweet William, Hyacinth, Ivy and Myrtle.

The stamps will be available to buy from all branches of Jersey Post from 29 April 2016. Philatelic stamp products such as sets of stamps, Miniature Sheets, First Day Covers and Presentation Packs will be available from the Jersey post offices at Broad Street, St Helier and Rue Des Pres, St Saviour on issue day and can be ordered now at: www.jerseystamps.com or by phoning the Jersey Philatelic Bureau on: 00 44 (0)1534 516320.