For the promotion of the Multilaterale Hertogpost 2017 exhibition in ‘s-Hertogenbosch (NL) POST Luxembourg and PostNL will issue on 25th of August a common minisheet showing architectural landmarks from the 6 member countries of the Multilerale organization. And in order to create a real scoop, the minisheet will also be issued in a version where a stamp from Luxembourg and a stamp from the Netherlands are together on the same minisheet. A folder in which all three minisheets are gathered has been produced.

The Multilaterale is an initiative that came from the Philatelist Associations of the German-speaking countries (Germany, Switzerland, Austria, Liechtenstein, and Luxembourg) as well of Slovenia and the Netherlands. The countries’ postal administrations have joined the interest group for the most part and, together with the associations, they support activities that promote philately. In this context, every two to three years, an international exhibition takes place in one of the member countries.

This year, the Dutch Philatelist Association and the Dutch Post Office will organize the exhibition from the 25th to 27th of August in s’Hertogenbosch. It will offer numerous highlights for all postage stamp collectors. Because Luxembourg will be organising the next exhibition in 2019, PostNL and POST Luxembourg will issue for this matter a joint postage stamp block for 2017.

It is certainly not the first time that joint issues of stamps are released to commemorate an important event. However, this time is special because there will be not only a Dutch version and a Luxembourgish version, but – for the very first time – a combined version of both country issues will be released as well. POST Philately will give this truly unique and special block as a gift to all its subscribers in acknowledgement of their long-standing loyalty. The block is attached to your subscription. It cannot be purchased individually.

The combined block is part of a folder offered by POST Luxembourg and PostNL. It also contains the stamped and unstamped version of the Dutch and Luxembourgish blocks. 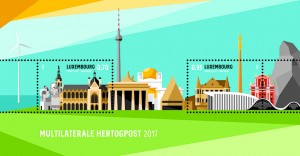 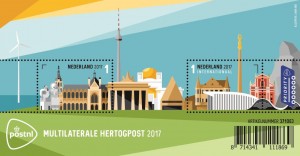 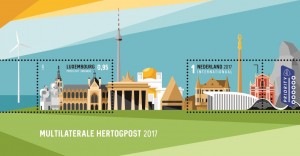