Post Luxembourg is issuing a new series of stamps on June 9th 2020.

A special stamp will commemorate the 150 years of the Diocese of Luxembourg.

Furthermore, another special stamp will commemorate the 40 years of the “Arts” section in secondary education. It has been introduces by the law of 13 April 1979.

Since then, the so-called “Section E” had access to the same higher education opportunities as those who have completed the previous sections. The stamp visual is the result of a competition organized among the students of the Arts section.

Moreover, a special series will be based on the topic of the “Rural Tourism” which shows various holiday activities which can be enjoyed in the rural Luxembourg such as cycling or farm holidays.

Last but not least Post Luxembourg will release an EUROPA special series based on the common theme defined by PostEurop. The two stamps illustrate the establishment of the ancient Tour&Taxis postal  route connecting neighboring  countries.

The fact that Luxembourg did not become a diocese until 1870 is mainly due to the political situation with frequently changing dependencies under other rulers. The Catholic Church in Luxembourg territory has existed since the early Middle Ages, when it was spread over six or seven dioceses, in accordance with the earlier borders.

Intense striving for ecclesiastical autonomy began in 1443 after the Duke of Burgundy conquered Luxembourg. Efforts failed however due to the resistance of the prince-bishops of Liège and Trier and the abbeys (Münster/Luxembourg, Echternach, Orval, St Hubert, St Maximin and Houffalize).

With the French Revolution in 1795, the old church structures were crushed. Initially, however, Luxembourg was incorporated into the diocese of Metz as the “Department of Forests” (1801-1823). Then, as part of the personal union of the Grand Duchy with the Netherlands, it was annexed to the diocese of Namur (1823-1833/40) as a further stage. It was during this period, after the Belgian Revolution of 1830, that a temporary Apostolic Vicariate for the city of Luxembourg was founded (1833). After the Treaty of London (1839), a separate Apostolic Vicariate was established for the diminished Grand Duchy in 1840. In 1870, Nicolas Adames finally became the first Bishop of Luxembourg. 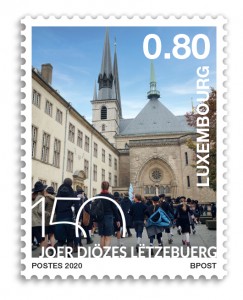 40 years of the “Arts” section in secondary education

The creation of the “Arts” department in secondary education is based on a law of 13 April 1979. It takes into account the development that, especially in the 1970s, visual communication and the role of creativity in general education gained in importance and prestige. Therefore, even after completing their schooling, pupils who opt for the so-called Section E should have access to the same higher education opportunities as those who have completed the previous sections.

While art education was previously a minor subject for learners interested in art, it was now included in the curriculum of the new subject area alongside mathematics, natural sciences, social studies and languages. In this way, the various branches of the subject, such as art history, drawing, graphics, media design, etc., can be worked through in detail both theoretically and practically.

Section E was implemented for the first time in the school year 1979-80 at the “Lycée des Garçons Luxembourg”. Today, it is an integral part of the Luxembourg school system and is characterised by its versatility and the integration of innovative working methods into everyday school life. 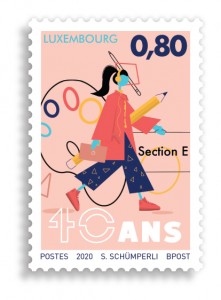 The second edition of the “Rural Tourism” series once again reflects the range of rural holidays in Luxembourg. For active people and those seeking relaxation, for “bons vivants” and families, for culture lovers and nature lovers, every holidaymaker will find something to suit their taste in Luxembourg.

Cycling is a very popular activity in Luxembourg, and this is certainly also due to the varied, well-developed and signposted cycle paths. A tour along the Moselle through the vineyards is definitely one of the highlights and guarantees great views.

Farm holidays offer new adventures and discoveries, especially for families. Having direct contact with cows, horses, sheep and chickens is very special for children. Nature is made tangible in a playful way. Fun for the whole family ensures a good rest and a real break from everyday life.

Like last year, the Luxembourg graphic designer, Eugene Kalmus, has created these two motifs with many details in his atmospheric, lively style. 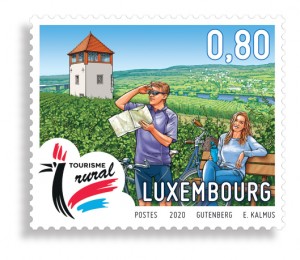 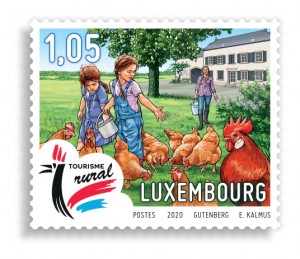 This year, the common theme of the EUROPA stamps issued by the European postal operators (PostEurop) has a direct link to their services, though of a historical nature.

In 1516 Charles V concluded an agreement with his general postmasters Franz and Johann Baptist von Taxis to improve postal connections, which resulted in the establishment of four main routes. One of them, the Vienna route, also ran through Luxembourg (Asselborn). These new services were not only available to the rulers but also to private individuals. In 1624, in the course of its development, a second route to Italy was established, which stopped in Perl in Luxembourg. At the end of 1680, Luxembourg was included as a branch in the Brussels-Vienna route, thus improving letter mail between Luxembourg and Brussels. Shortly afterwards, official mail transport to Longwy and Thionville- Metz and then to Trier became possible. The routes were permanently established in 1701. In this way Luxembourg enjoyed connections with all its neighbouring countries.

Until about 1700, the postal services in Luxembourg were mainly carried out on horseback. Only after that did postal carriages become a regular sight. 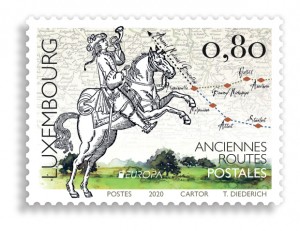 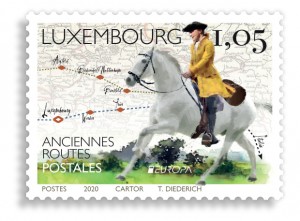