Luxembourg new stamp issues in May 2019

On 07 May, Post Luxembourg is issuing a special stamp illustrating the 175th Anniversary of the “Maîtrise (the choir) de la Cathédrale Notre-Dame”.

Another special stamp will promote the 2019 European elections which will be held between the 23 and 26 May 2019.

Furthermore, Post Luxembourg will release a special stamp dedicated to the new site of the National Library. The new one will welcome the public in the Kirchberg district.

Since the first issue in 1956, the Europa stamps have been a symbol of Europe’s desire for more integration and cooperation. The release of the 07 May 2019 representing domestic birds will again reinforce the consciousness of the shared roots, culture and history of Europe and its goals.

In addition, another set of stamps will highlight Luxembourg as destination for rural tourism. The two motives will certainly promote whatLuxembourg has to offer in terms of holidays in the countryside.

Last but not least, the SEPAC members’ joint issue is on the theme of “Old residential houses”. Post Luxembourg has chosen for its motif a Jugendstil villa called “Villa Clivio”

The 175th Anniversary of the “Maîtrise de la Cathédrale Notre-Dame”

The “Maîtrise Sainte-Cécile de la Cathédrale Notre-Dame de Luxembourg” is particularly proud that an entire series of events and concerts with internationally renowned choirs is scheduled to celebrate its 175th anniversary. (www.maitrise.lu)

The choir was formed on 16 June 1844, first as a male choir and then in 1965 as a mixed choir, which allowed both male and female singers to discover the great repertoire of holy music.

The Cathedral Choir was then able to develop a rich and varied offering through diverse music recordings of the performance of great works with the orchestra and above all, many concerts in the Grand Duchy and overseas. In 2017,the Choir had the honour of singing a concert in Rome and providing a musical arrangement for a mass in St Peter’s Basilica.

In addition to its liturgical activities, through its cantos, the Choir brings to life the festive nature of national and religious events in the Cathedral of Luxembourg. Since September 2013, Marc Dostert has led the cathedral choir. Currently, the choir comprises 45 permanent members, 20 back-up members and 6 interns. 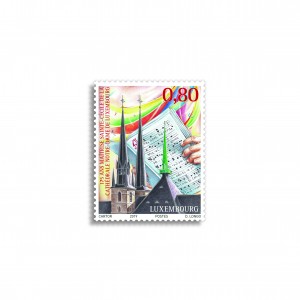 Between 23 and 26 May 2019, the 27 member states of the European Union are set to hold new elections to the European Parliament, which is the central institution of EU democracy, where the representatives of the EU citizens sit.

It is the second time since 2014 that the major European families of parties are designating lead candidates to explain the different political positions to the voters in the run-up to this election.

Although the representatives in the European Parliament are unable to elect a government, since the Lisbon Treaty in 2009, their rights are much more extensive than before. For example, the Parliament appoints the President of the European Commission and is obliged to monitor the European Union institutions. Furthermore, it is also responsible for safeguarding one of the fundamental rights of every EU citizen: the right of petition, which allows them to submit a request, a complaint or a comment concerning EU law or a call for the European Parliament to take a position on a certain issue.

All EU citizens have the right to make their voices heard in the European elections and can vote in their home country or in another member state if it is their main place of residence. 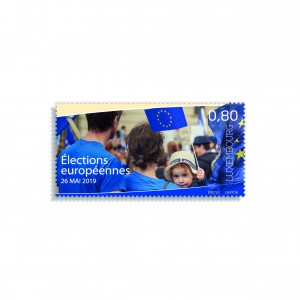 The new site of the National Library

In 2019, the new building for the National Library will welcome the public in Kirchberg district, at the crossroads of John Fitzgerald Kennedy avenue and Konrad Adenauer boulevard. Served by a tram station, equipped with an underground car park and a covered area for bicycles, the library will be easily accessible.

The objectives of the construction project were to design a sustainably functional and attractive building, of high quality in terms of comfort and energy efficiency, which should stand out as a simple and natural structure. The BNL has ensured the implementation of solutions guaranteeing utmost versatility so that it can adapt to the future developments of libraries’ projects and tasks.

Reading rooms on various floors will see the emergence of up to 200,000 works. Alongside the many work and study stations, visitors will also find little “relaxation” bays and special areas for group work. The mixture of collections, the heritage preservation activities, a conference and seminar area, as well as a little cafe will make the National Library a venue for exchange and debate. 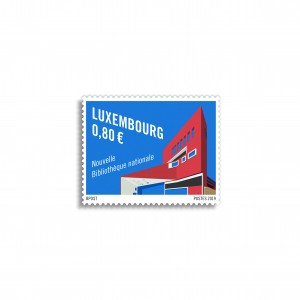 Since the first issue in 1956, the EUROPA stamps have been a symbol of Europe’s desire for more integration and cooperation.

As the industry association of 48 major European postal operators, since 1993 PostEurop has been supporting the activities of postal services and consequently also philately across Europe, and in this context also coordinates the issue of EUROPA stamps.

The motifs, which all belong to one common theme each year to reinforce the consciousness of the shared roots, culture and history of Europe and its goals, are amongst the most collected and most popular stamps in the world. The theme for 2019 is “Domestic birds”.

Therefore, POST Luxembourg has decided to publish as EUROPA stamps the limited edition set which is available from 2018 to 2020 in collaboration with “natur&ëmwelt” and depicts Luxembourg’s rare bird species.

To that end, they will be therefore be given the official logo. The number of EUROPA stamp motifs is limited to two (one national value and one European value). The set will therefore consist of two stamps this year. The stamps feature the common linnet and the yellowhammer.

By staying at a farm or another form of countryside accommodation, not only can holidaymakers experience the truly rural character of the different regions, they also have a great starting point from which to discover much of what the Grand Duchy has to offer.

One third of Luxembourg is covered in forests, and the country has more than 5,000 km of walking routes and more than 600 km of cycle paths. This makes it a very inviting place to relax or get active in nature. Add to this the Grand Duchy’s more than thousand-year-long history with both historic and modern architecture and a whole host of cultural attractions. The choice of various different types of accommodation, from holiday homes to guests’ rooms on farms, allows visitors to pick a lesser or greater degree of integration with everyday rural life and therefore decide the way they shape this unique holiday entirely for themselves.

From biking trips and hiking to canoeing and kayaking, from the Moselle wine festival to visiting secret gardens, from early-morning birdwatching to romantic sunsets, the possibilities are abundant and attract visitors of all ages.

Holidays in the countryside always offer an interesting range of activities and opportunities for relaxation. The “Rural Tourism” set, which POST Philately is issuing from 2019 to 2022 with two motifs per year, will certainly do its bit to promote what Luxembourg has to offer in terms of rural tourism. It has been created in close collaboration with the Association for the Promotion of Rural Tourism in the Grand-Duchy of Luxembourg, or APTR (“Association pour la Promotion du Tourisme rural au Grand-Duché de Luxembourg”). The APTR’s tasks include the classification of holiday homes. Wherever visitors see their logo, the rooster in the national colours of Luxembourg, they can rest assured they will find the right standards of quality.

The Luxembourg graphic designer Eugène Kalmus is drawing the various motifs. When designing stamps, it is always a challenge to depict a whole scene in such a small format. Especially when it comes to trying to spark the viewer’s interest and passion with realistic impressions and many individual details.

In 2019, the SEPAC members’ joint issue is on the theme of “Old residential houses”. POST Luxembourg has chosen for its motif a Jugendstil villa called “Villa Clivio”.

Villa Clivio cannot be seen directly from rue Goethe, on which it is located. It is named after its builder, the entrepreneur Cesare Clivio, who came from Varese in Lombardy, where the “Floreale” or “Libertystyle” architectural style was flourishing at the time. The Luxembourg architect Mathias Matin designed the house in 1908 with its decoratively curved lines and floral ornamentation. But when inspecting the architectural details closely, you can also see the overall artistic use of the “Art Nouveau” style, which continues from the external structure to the interior design.

The coloured paintwork of different scenes and decorative elements is stunningly beautiful and almost poetic.

The house was sold in the 1930s and was used by its owners as their home until 1960/61. After this, it stood empty until the BCEE (Spuerkees) purchased the building in the early 1980s and has taken care of the villa ever since.

Villa Clivio was designated a “national monument” on 13 January 1989. 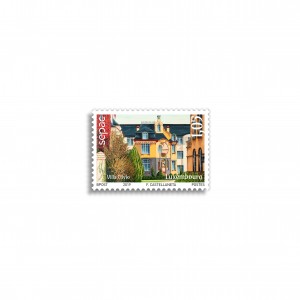