Luxembourg new stamp issues in May 2022

Post Luxembourg is issuing a new series of stamps on the 17th of May 2022.

Furthermore, a special series will be based on this year’s theme for the EUROPA special stamps: “EUROPA-Stories & Myths”. The stamps will illustrate the Luxembourgish famous myths of “Kropemann” and “Melusina”.

Another special stamp will draw the attention to the topic of “Greener urban areas”. The stamp has been created by artist Ben Carter.

In collaboration with the “Administration de la nature et des forêts “, a special series will show drawings made by Johan de Crem of “Mammals in Luxembourg”, They have been chosen to show the diversity in the country.

A second Block will praise the 50 years of the Luxembourg flag, officially adopted on the 23th of June 1972.

Last but not least, a special stamp will draw the attention to this years “Asteroid Day” founded, amongst others, by the astrophysicist and lead guitarist of the rock band “Queen” in 2014. The Topic chosen is “Defense”. “ more “Asteroid days” stamps will follow in 2023 et 2024.

Since 2007, there have been two titleholders every year, one from the established EU and one from the new member states that joined in the 2004 and 2007 enlargements, the idea being to involve newer countries in the concept as quickly as possible. Now, a city from one additional country that is a candidate or potential candidate for accession to the EU can also become European Capital of Culture; Novi Sad in Serbia was chosen for 2022.

Esch-sur-Alzette and Kaunas are both the second-largest cities in their countries. The organisers of both projects have made it a priority to involve the general public and point the way for Europe’s future.

Esch2022 has chosen the theme “Remix”, whereas Kaunas’ slogan is “From Temporary to Contemporary”, with the focus on an examination of its own history in the 20th century. An extensive program of festivals, exhibitions, concerts and other events deal with the remembrance of what happened between the wars, in WWII and during the Soviet occupation. Esch2022 and Kaunas have also planned joint projects, in which Novi Sad will also take part; these include creating a jazz-inspired production and a large-scale graffiti artwork. 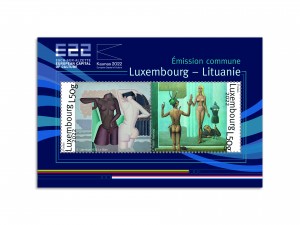 This year’s theme for the EUROPA special stamps, which are issued by the postal administrations are among the most collected and popular stamps in the world, is “Stories and Myths”.

Many myths, tales and legends were initially passed down by word of mouth. Fantastical descriptions were merged with real people, which gave the story more of a ring of truth but didn’t make it so. In choosing the motifs, POST Philately felt it was important that the two stories have a long tradition in Luxembourg but remain relevant and in people’s consciousness today.

The Kropemann was traditionally a nature spirit who dwelled in rivers, streams, ponds, lakes, wells, weirs or springs. Legend has it that he grabs children who get too close to the water with his hook, called a Kropestaang, drags them in and devours them or keeps them prisoner. Up to 1950, the Kropemann was known and feared throughout Luxembourg. With how horrifying the story sounds, many parents in Luxembourg have used the threat of the Kropemann to keep their children away from dangerous waters and banks, and protect them. The legend was rediscovered 30 years ago in the western Luxembourg commune of Redange. The community has since more or less adopted the Kropemann as their mascot, and sculptures have been erected, making him a permanent fixture. An annual festival is held in his honour, where he appears to the many tourists (these days as a friend of children), promoting clean water and nature, among other things.

According to legend, Melusina was the wife of Count Siegfried I, who is considered the founder of Luxembourg. In 963, the Count built a castle for his beautiful bride on the Bock promontory above the River Alzette to fulfil one of the two conditions she made before agreeing to marry him: she did not want to leave the Alzette Valley. Secondly, she wanted to be alone every Saturday.

After some years, or so the story goes, and spurred on by friends, Siegfried’s curiosity got the better of him and one Saturday he peered through the keyhole to see what his wife was doing, and saw that in the place her legs should be was a fishtail. His gasp betrayed his presence and Melusina vanished into the River Alzette. It is said to this day that she reappears every seven years, makes a stitch in a shirt and when the shirt is finished the Alzette will overflow, the cliffs will crumble and the City of Luxembourg will be destroyed.

Melusina with her fishtail is one of the most well-known symbols of Luxembourg City. Her sculpture sits on the bank of the River Alzette and is the much-loved subject of myriad illustrations. 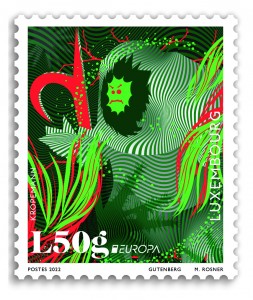 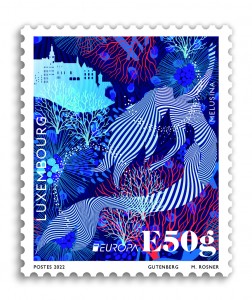 By 2050, approx. 70% of the world’s population will be living in urban areas, making it more and more important to integrate urban and green living spaces and create natural landscapes in towns and cities in order to improve the residents’ quality of life and tackle climate change.

The growing number of urban dwellers increases demand for housing; it has to be built, so green spaces shrink. Due to increased development and intensive use by humans as well as climate change, many residential areas have high concentrations of pollutants, low humidity and extreme temperatures.

When architects, city planners and landscape architects work with biologists, sociologists and ecologists, the outcome can be new ideas and concepts, which make towns and cities greener for all.

Green open spaces, “greened” buildings as well as greater incorporation of renewable energies and the promotion of biodiversity are important factors. For example, parks are not just part of the urban “green lung” – they are meeting spaces or somewhere to relax and unwind. “Greened” facades or roofs not only mitigate the effects of climate change but provide something different of interest to look at.

Artist Ben Carter, who lives in Luxembourg, uses his works to foster an appreciation of the natural environment: “Art can be a powerful instrument to raise awareness for these serious topics in a creative and vivid fashion.” 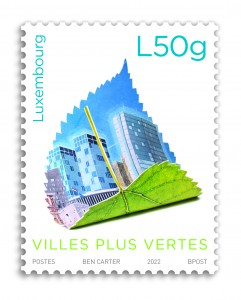 There are more than 6,350 species of mammal in the world, of which a good 70 can be found in Luxembourg (most are native; a few are now considered extinct).

In collaboration with Administration de la nature et des forêts in Luxembourg, for this second issue of the special series, representatives of four different taxonomic orders were deliberately chosen to show the diversity in the country. For this diversity to be maintained over the long-term, it is essential that natural habitats be protected and that people respect nature in general.

The hazel dormouse weighs only 20 to 30 grams. It lives almost exclusively in bushes and trees and eats mainly berries, seeds, hazelnuts and tree fruit. In the summer, they build a nest the size of a tennis ball and the female bears 4 to 6 young per litter. The hazel dormouse hibernates from October to April in a safe, frost-protected hole in a tree or burrow. Even though the animals are impacted by the intensification of farming, the hazel dormouse is currently still relatively widespread in Luxembourg.

The hedgehog’s coat of spines consisting of around 5,000 modified hairs is mainly for protection against predators. In addition to the badger and the eagle owl, humans – with their cars and their interference in nature (Luxembourg being the most fragmented country in Europe) – are the hedgehog’s main threats. That said, the crepuscular and nocturnal hedgehog is widespread across Luxembourg. The solitary animal eats mainly insects and worms that it finds in hedges, orchards, the fringes of deciduous forests, semi-natural gardens and parks, as well as extensive meadows. The hedgehog hibernates from October to April.

European hares are herbivorous and live mainly in open or semi-open landscapes. Largely nocturnal, their senses of hearing, smell and sight are very well developed. Hares can bear up to three litters a year, each consisting of two or three young. The population of european hares, which are normally solitary, has declined sharply in the last 50 years, primarily due to intensive farming and significant losses due to heavy traffic.

This smallest species of native deer is also herbivorous. Active at dusk and night, deer prefer semi-open landscapes at the edges of forests with plenty of hedges and bushes that provide cover and where they can retreat into the dense undergrowth by day. Male deer grow antlers during the mating season and cast them in autumn. Except in winter, when they can form small groups, deer are solitary animals. The population is unnaturally high in Luxembourg these days because there are no longer any natural predators, such as the lynx and wolf. 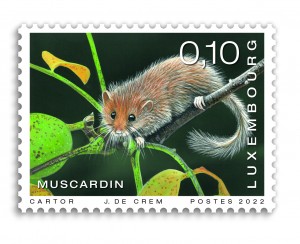 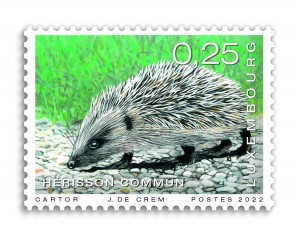 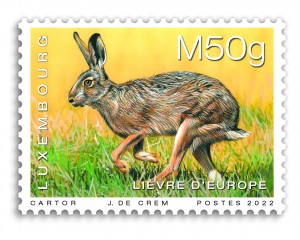 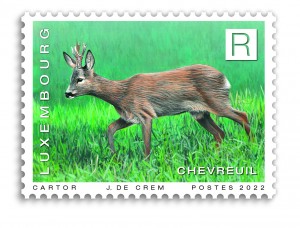 50 years of the Luxembourg flag

Alongside the coat of arms and the national anthem, the national flag of Luxembourg is undoubtedly one of the most important official emblems of the Grand Duchy. The flag, in its current form, was officially adopted on 23 June 1972. It consists of three horizontal strips of equal size. In vexillology, this kind of triband design (be it horizontal or vertical) is known as a tricolour.

The colours of the three stripes – red on top, white in the middle and light blue at the bottom – are similar to those on the flag of the Netherlands, but the blue in the flag of Luxembourg is lighter. The Grand Ducal Regulation of 27 July 1993 defined the colours of the Luxembourg tricolour as Pantone 032C for the red, and Pantone 299C for the blue. The aspect ratio of the two flags is also different (Luxembourg’s is 1:2 or 3:5; the Netherlands’ is 2:3). Despite the geographic proximity of the two countries and their historical points of contact, the similarity between the two national flags is coincidental.

The “50 years of the Luxembourg flag” souvenir sheet marks a first for POST Philately. For the first time ever, lenticular technology was used for printing and processing. Thanks to the use of lenticular film, which enables you to see different parts of the motif depending on the angle at which it is held, it looks like the flag is flying on the stamp. The background around the edge of the souvenir sheet also changes. 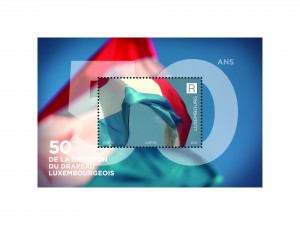 In 2014, astrophysicist and lead guitarist of the rock band Queen Dr Brian May, President and chief executive officer of the B612 Foundation Danica Remy, Apollo 9 astronaut Rusty Schweickart and filmmaker Grig Richters founded “Asteroid Day” to raise awareness and provide information about the importance of asteroids and create an appreciation for the risks they pose, but also the opportunities they present.

Asteroid Day is held annually on 30 June, the same day that the biggest asteroid impact in the Earth’s recent history occurred in Tunguska in Siberia in 1908.

In 2016, the United Nations declared Asteroid Day under the leadership of the Association of Space Explorers (ASE) to be a global day of education to promote knowledge about asteroids and generate interest in asteroids among the general public. Independent organisations such as schools, museums, space agencies and clubs all over the world hold conferences, meetings, lectures and more as part of the annual Asteroid Day campaign.

POST Philately is issuing a series of three special stamps over three years; the first motif this year depicts “Defense”. In 2023, a motif on the theme of “Discovery” will be issued, while for 2024, the year in which “Asteroid Day” will celebrate its 10th anniversary, the subject of the stamp will be “Space Resources” (mining and utilisation of natural resources in space). 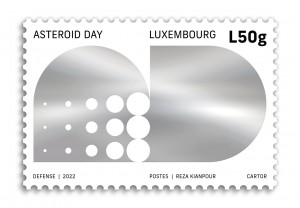