A special series will illustrate the passion of collecting. Three chosen areas attracting many collectors are the collection of beer mats, coins and metal caps, all three round in shape.

A special stamp will commemorate the 50 years of “Médecins sans Frontières”, based in Luxembourg since 1986.

A special series of charity stamps will be issued and will feature the stunning landscapes along the Moselle River in Luxembourg. The pictures were taken by the Luxembourgish photographer Uli Fielitz.

Finally, a last special series “The end-of-year celebrations” stamps  will be issued. This year a symmetrical design was chosen, based on the hypersymmetrical formula developed by the artist Jens W. Beyrich.

Collecting has been around for a very long time. Collecting is a meaningful occupation that brings you together with like-minded people and brings fulfilment when a long-sought-after piece is found; there is no real end point.

Valuable objects or those that bring personal pleasure to the collector, rare or everyday objects – there is a broad range of very different possibilities and motivations for developing a passion for collecting.

Philately is a good example and typifies many aspects of a true passion for collecting.

For this special series, POST Philately has chosen three areas attracting many collectors, which, from a technical point of view, have one thing in common: the round shape characterising many of the objects.

The predecessors of beer mats were made from felt, and the switch to cardboard (from 1880 in Buckau in Magdeburg), then to wood felt (1892 in Dresden by the discovery of Robert Sputh) and later to wood pulp cardboard (1903 in Murgtal by Casimir Otto Katz) was primarily due to practical reasons. The shapes and printing became increasingly original over time. www.luxem.beer

Coins are almost always made from a metal alloy. Coins can be used as an everyday means of payment, as collectors’ items, or as investments (although strictly speaking, the commemorative and investment coins loved by collectors are technically medals). The collector’s value depends on supply (number of coins issued) and demand. Extremely rare and highly sough-tafter specimens such as very old but well-preserved coins are particularly valuable. Cercle Numismatique du Grand-Duché du Luxembourg

The small metal cap that forms part of the muselet and sits between the cork and the wire basket is there to hold the wire mesh on the cork in shape and to prevent the upper end of the cork being broken by the pressure of the wires of the basket. The metal caps often bear the producer’s logo or may be part of the marketing campaign. As with many collectors’ items, older objects are highly sought-after in placomusophilia. www.placomusolux.lu 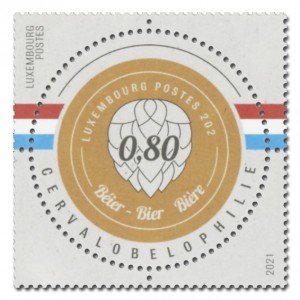 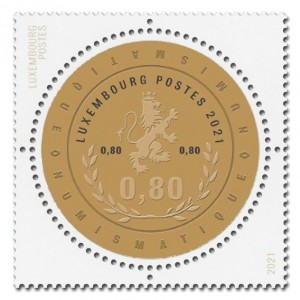 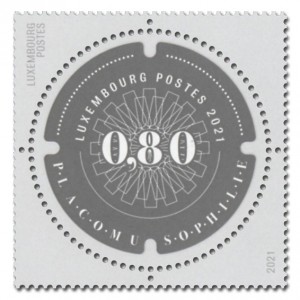 In May 1967, an armed conflict broke out in Nigeria, in the province of Biafra, which had just declared its independence. The population suffers and two million people die of hunger. This was a revolting situation for the doctors and journalists present on the spot, who were asked to turn a blind eye.

These doctors and journalists then alerted the press to reveal the horrific situation to the wider public. It was from this indignation that Médecins Sans Frontières (MSF) was born in 1971, an emergency medical organisation free to speak out and act.

The organisation provides medical assistance to populations whose lives and health are threatened by armed conflict, epidemics, pandemics, natural disasters or exclusion from healthcare.

MSF is 50 years old this year and today more than 64,000 people are working on the front lines of medical emergencies in more than 80 countries around the world. Each year, MSF teams perform more than eight million interventions, ranging from essential vaccination campaigns to complex surgical procedures.

Free from political, economic, military and religious influence, more than 90% of MSF’s financial resources come from private donations, enabling it to develop its activities in full independence.

The Luxembourg section was founded in 1986 and houses an operational research unit (LuxOR), designed to evaluate and improve practices within health programes by supporting the humanitarian and medical action of MSF teams worldwide. 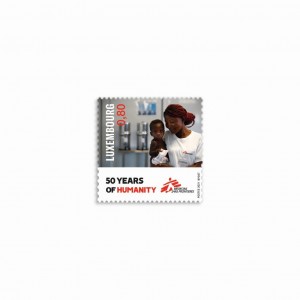 With their pleasing simple beauty, not only do wildflowers such as forget-me-not, bird’s foot trefoil, common whitlowgrass and bladder campion add variety and splashes of colour on the wayside.

They are an important food source for bees, butterflies and other insects, which makes them essential for maintaining biodiversity. Since the plants are very well adapted to the local climate, they need little watering and feeding. A low-maintenance wildflower meadow using native seeds is a great alternative to an ornamental lawn for home gardeners if they have little time to invest but would still like to help preserve the balance of nature.

The photos of the four motifs are by Christine Kosmala, who is a POST Philately employee and prolific amateur photographer, and is of course delighted to see her photos being turned into stamps. 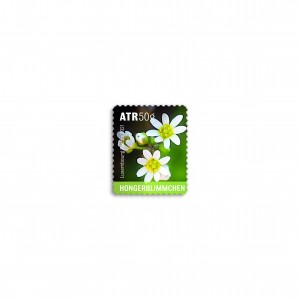 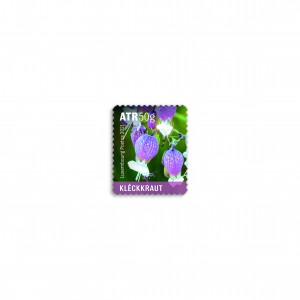 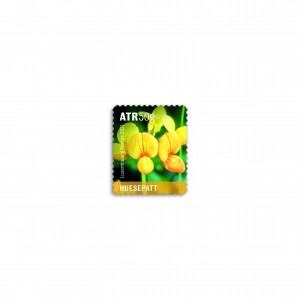 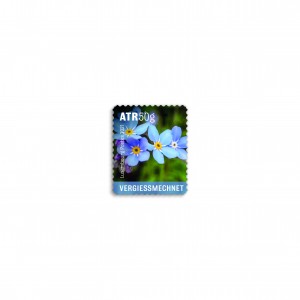 The fourth and final part of the special series features the stunning landscapes along the Moselle River in Luxembourg, which forms approximately 40 km of the country’s borders between Luxembourg and Germany from Schengen in the southeast to Wasserbillig in the east.

Stretching 544 km in total, the river rises in the Vosges mountains in France and joins the Rhine in Koblenz, Germany. There is a lot to discover and experience on the Moselle: it is everything from a waterway for cargo boats and river tours, a destination for watersports such as swimming, canoeing and water skiing, to a backdrop for cycling or hiking trips along the river or through the slopes of the valley with its vineyards.

The Schengen viaduct, spanning the Moselle at the point where Luxembourg, Germany and France meet, was built in 2003. It was here that in June 1985 one of the most important agreements in European history was signed – the Schengen Agreement – which established the Schengen Area, allowing the free movement of people.

Remich is often described as the pearl of the Moselle, due in no small part to what is probably the best-known Moselle promenade, which is 3 km long. Between Remich and Remerschen lies the “Haff Réimech” nature reserve with its futuristic Biodiversum nature centre at the foot of the vineyards.

Machtum is a real winegrowing village. Its charm comes from the beautiful vineyard cottages, which were built before the First World War, and the stunning panoramic views of the bend in the river and the Moselle valley above the village. This corner of the Moselle landscape is particularly picturesque and inspired one of painter Nico Klopp’s most famous works.

Grevenmacher, the main town in the region has many tourist attractions: it is the starting point for an excursion on the Moselle on board the MS Princesse Marie-Astrid, houses Luxembourg’s unique Butterfly Garden and has Roman and medieval sights to discover. Luxembourg’s only inland port is located on the left bank of the Moselle between Grevenmacher and Mertert. 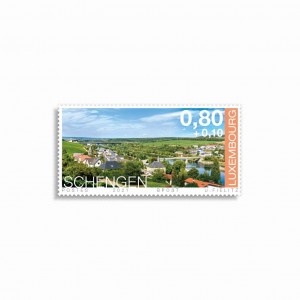 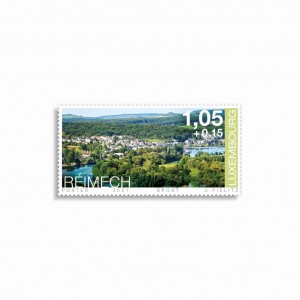 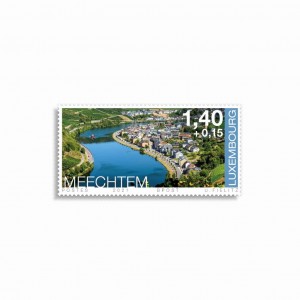 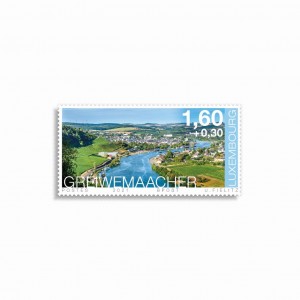 At first glance, this year’s special stamps seem to depict a wintry graphic pattern. However, a closer look quickly reveals that the two snowflakes have incredible symmetry. The special finish chosen this year (metallic and glow-in-the-dark inks) enhances the fascinating visuals.

Hypersymmetrics, or “multidimensional symmetry” is a form of artistic representation developed by Jens W. Beyrich. His works, predominantly digital prints and sculptures, such as polyhedrons and spheres, were first exhibited in the UK in 2013, then in Liechtenstein, Switzerland, Germany, Luxembourg, San Marino and in Italy at the 58th Venice Biennale. In 2019 he created a jewellery collection.

The viewer generally gets a sense of structuredness without being able to tell the underlying extent and detail thereof. Twelve stars, which make up the basic form of the snowflakes, can be configured in 1016 different ways. If each one was drawn on a beer mat, they would cover the surface of the earth. 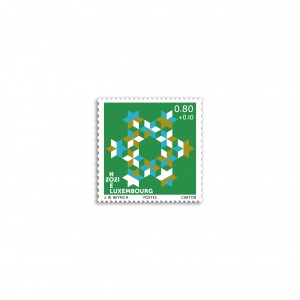 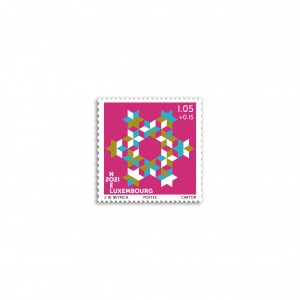