Post Luxembourg is issuing a new series of stamps on September 14th 2021.

A second special stamp will honor the opening of a new headquarters of the Luxembourg Fire and Rescue corps: the new National Fire and Emergency Service Center.

Another stamp shows Luxembourg’s pavilion at the Dubai World Expo which is based on the themes of “Opportunity”, “Mobility” and “Sustainability”.

Moreover, as part of the SEPAC’s 2021 joint stamp issue on the theme of “Historical Maps”, Post Philately is depicting the oldest precise map of the city of Luxembourg, drawn by Jakob van Deventer.

Last but not least, Post Philately is issuing a special stamp celebrating the “stamp day 2021” which will this year be hosted by the Cercle Philatélique Mamer.

With its striking façade of diamond-shaped metal elements, the new national football and rugby stadium is already a distinctive feature in the south of the capital.

Situated between the district of Cloche d’Or and the town of Kockelscheuer, it enjoys good transport links thanks to its proximity to the motorway, P&R and the planned tram stop. The infrastructure includes covered seating for around 9,464 spectators, and all the additional facilities and function rooms you would expect to find in a modern international sports stadium (UEFA Category 4). The adjacent multi-purpose space can be used as a car park, as well as for various events such as concerts accommodating up to 12,500 people.

The stadium was planned by the PGNL consortium, while the stadium was designed by the architects von Gerkan, Marg and Partners (gmp) in Germany and Beng in Luxembourg. Construction began with the ground-breaking ceremony on 18 September 2017. The developer is the City of Luxembourg (Direction de l’Architecte – Service Bâtiments), with financial support from the Ministry of Sport. 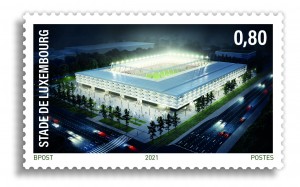 Opening of the CNIS

CNIS, the new headquarters of the Luxembourg Fire and Rescue Corps (Corps grand-ducal d’incendie et de secours, CGDIS), has already opened its doors this year, and will add the following CGDIS units:

• six of the seven CGDIS departments;

In addition to the superbly equipped fire brigade and emergency services infrastructure (garages, workshops, offices, equipment and fitness areas, classrooms, etc.), constructed with a state-of-the-art processing structure, the CNIS houses training and drill facilities; these include a residential school as well as a unique outdoor and indoor training ground to the rear of the buildings, where a wide range of realistic scenarios can be simulated and practised. Alongside the professional firefighting units, CGDIS volunteers are also trained at the complex.

With its comprehensive functionality, the CNIS is the new command centre for Luxembourg’s fire and emergency services.

The first World Expo to be held in an Arab country will run from 1 October 2021 to 31 March 2022 with the motto “Connecting Minds, Creating the Future”.

It was initially planned to take place a year earlier but was postponed because of the global COVID-19 pandemic. Dubai is expecting more than 25 million visitors to around 200 pavilions split into the sub-themes of “Opportunity”, “Mobility” and “Sustainability”, which will house the exhibitions of over 192 countries and numerous organisations.

The Dubai World Expo is the perfect place to present Luxembourg and show the world how the country and its inhabitants have managed to continuously reinvent themselves over time, and the vision it has of the future and coming generations.

The Luxembourg pavilion was designed by the architects METAFORM and is part of the “Opportunity” theme; it is called “Resourceful Luxembourg”. The design is based on the idea of the Möbius strip, an infinite form symbolising the openness and dynamism of the country. The exhibition and the activities planned present the cultural, natural, technical, industrial and economic diversity that Luxembourg offers its inhabitants and all guests and partners and provides insight into the opportunities resulting from this comprehensive and inspiring combination. 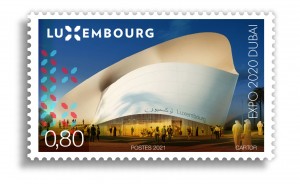 As part of the SEPAC organisation’s 2021 joint issue of stamps on the theme of “Historical Maps”, POST Philately is depicting the oldest, precise map of the city of Luxembourg drawn by Jakob van Deventer in the 16th century. He created this important document shortly after 1559 on the orders of King Philip II of Spain.

Jakob van Deventer was one of the first cartographers to prepare maps (in van Deventer’s case mostly on a scale of 1:8000) using triangulation, i.e., by splitting a surface into triangles for measurement. 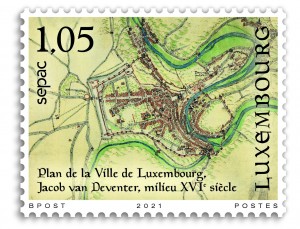 The impressive Vianden Castle is one of the best-known tourist attractions in Luxembourg.

As part of the “Tourism in rural areas” theme, it represents the many historical buildings for visitors to discover across the entire country. Numerous castles, forts and mansions, some with lovely gardens and parks, provide an opportunity to learn more about Luxembourg’s varied history and to gain a close-up view of how people lived in earlier times.

This third stamp is the last in the POST Philately special series. It was conceived in conjunction with the APTR (Association for the Promotion of Rural Tourism in the Grand Duchy of Luxembourg/Association Luxembourgeoise pour la Promotion du Tourisme Rural), which has continuously expanded its range of accommodation over the last thirty years, providing the opportunity to rediscover the many sides of Luxembourg in a variety of ways.

The APTR is a member of the European association, Rural Tour, which is this year celebrating its 30th anniversary. This milestone was celebrated in style at the general meeting of Rural Tour, which took place on 29 June in Luxembourg. 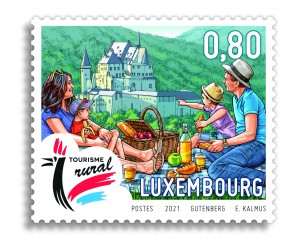 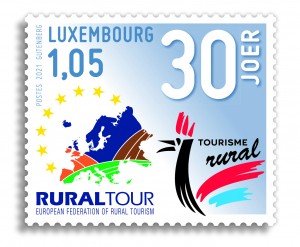 In 2021, the Cercle Philatélique Mamer is hosting the 80th Luxembourg Stamp Day.

The Mamer commune in the west of the country has around 10,000 inhabitants and three districts of Mamer, Capellen and Holzem. The picture on the special stamp is of the Villa Bourg that sits on the main crossroads in Capellen, which belongs to the Luxembourg state and is used by the Ligue HMC. The Villa has a large park of around three hectares.

The Villa originates from 1864/65 and was built by a notary who had his offices on the ground floor and lived on the first floor. It was extended for the first time shortly thereafter and was used by other notaries. A particular note was the extension made to the Villa by notary André Wurth-Collart, which gave the building the imposing appearance it enjoys to this date.

It got its current name in 1920 when purchased by the notary Bourg, who used it until World War II. The building then stood empty until 1968 when it became the registered office of Ligue HMC. The organisation supports people with intellectual disabilities and has additional buildings for various uses in the park so that the site is today the joint meeting place for the Ligue HMC.

Villa Bourg was made a listed building in 2018. 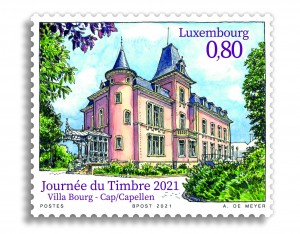