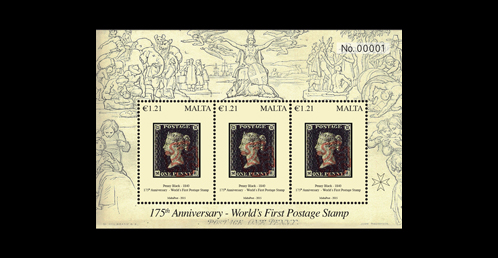 On 2 May 2015, MaltaPost commemorated the 175th Anniversary of the world’s first Postage stamp with the release of a philatelic issue of a miniature sheet bearing three identical stamps illustrating Queen Victoria’s profile.

The “Penny Black” of Great Britain was the first pre-paid adhesive postage stamp and was introduced on 6th May 1840. The image of Queen Victoria was from an 1837 design by William Wyon. Prior to 1840, adhesive postage stamps and envelopes did not exist. The issue of the first stamp was a result of a postal reform that was introduced in 1837 by Sir Rowland Hill, the British Postmaster General. Hill worked with artist Henry Corbould to refine the portrait and define the stamp’s intricate background pattern. Engravers George Rushall and Charles and Frederick Heath prepared the design for printing. As the stamp was printed in black, the one-penny stamp soon became known as the ‘Penny Black’. The introduction of uniform penny postage was an immediate hit and encouraged people to send letters, postcards and Christmas cards more than ever before. Given this success other countries followed suit.

The stamp bears a value of €1.21, was designed by MaltaPost and was issued in miniature sheet format each bearing three stamps. Each stamp measures 41mm x 30.5mm, with a perforation of 13.7 x 13.8 (comb.) bearing the Maltese Crosses watermark. The sheet measures 123mm x 80mm. Printex Limited printed the set in the offset process and the issue consists of 20,400 miniature sheet.

Orders may be placed online at www.maltaphilately.com