On April 28th, Iceland Post will be issuing nine new exciting stamps : first, two stamps in the now famous “Tourist Stamps” series. This series was launched in January 2012 with the underlying purpose of showing the world the unique beauty of Icelandic nature. The idea was also to keep the stamps relatively small, so they would fit perfectly on the postcards our visitors like to send home 🙂 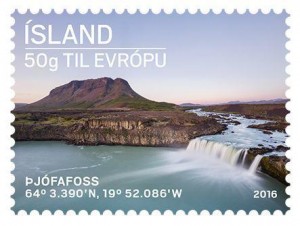 …. and Jökulsárlón, possibly one of Iceland’s best know natural wonders. 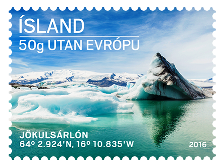 This issue also celebrates 60 years of Europa stamps, for which a design competition on the theme “Think Green” was organized among the European postal administrations. 24 postal operators submitted their designs, and the contribution from Cyprus, designed by artist Doxia Sergidou, received most votes and now decorates the joint Europa stamp issue.

With her design, artist Doxia Sergidou wishes to inspire us to create a greener planet.

The stamp illustrates two versions of Europe, a polluted – hopefully becoming the past – and a green Europe – the future?. When asked about the concept of the design Ms. Sergidou explains that “the main purpose was to show that it is in our hand to create a greener planet. Thus, I have placed a hand on the top side of the stamp which basically represents anyone of us, actively replacing the grey colour (the environmental pollution) with the green colour which symbolizes environmental living and hope, and in turn inspire us for a better world”. 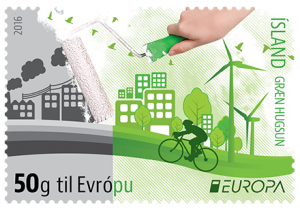 Nota bene, these stamps are also available as self-adhesive in the Europa booklets.

April also sees the release of the SEPAC issue and this year the chosen theme is “The seasons” and Spring is the season chosen for SEPAC. 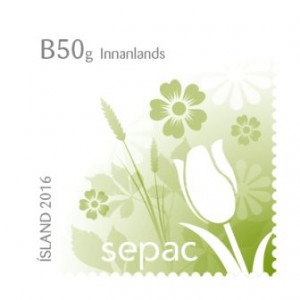 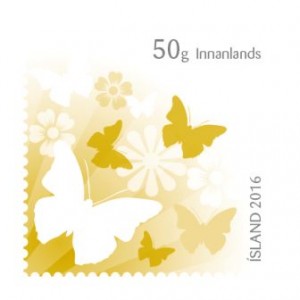 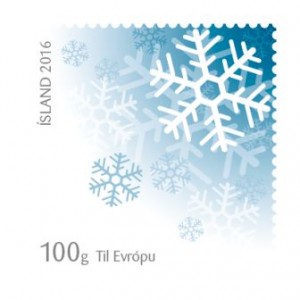 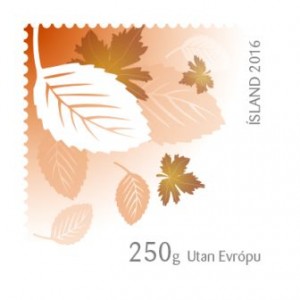 The “Seasons” stamps are self-adhesive and were designed by Borgar Hjörleifur Árnason.

And last but not least,  the stamp commemorating the Eruption in Holuhraun, which many of you have been waiting for, will finally be released now.

Originally, this stamp was included in the issue plan for 2015. However, this issue had to be postponed, since the lava field had still not received its official name – which was to appear on the stamp – from the appropriate authorities by the time the issue was due in Autumn 2015. 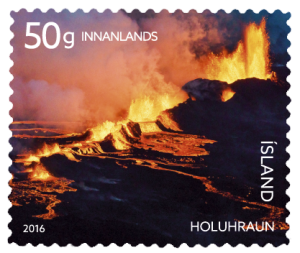 633A
Volcanic Eruption in Holuhraun

Sustained seismic activity began in Bárðarbunga on August 16, 2014 with a volcanic eruption starting in Holuhraun north of Dyngjujökull glacier on August 31. The volcanic eruption lasted almost six months, which is rather unusually long for a single volcanic eruption. It is very fortunate that these activities evolved as they did with a rather quiet eruption in ice-free terrain far away from human habitation.

The stamp was designed by Hlynur Ólafsson and Daði Harðarson (photo), printed in offset litho by Joh. Enschedé Security print.

All these stamps will be available to buy from all branches of Iceland Post from 28 April 2016.

For any further information on Iceland Post’s philatelic products, please contact us at