Home › Uncategorized › The beginnings of mechanized agriculture in Iceland

The beginnings of mechanized agriculture in Iceland

A hundred years ago, a new page was turned in Iceland’s agricultural history when the first tractor was imported to the country on 12th August 1918. Until then, agriculture in Iceland was very traditional, and in places still very close to subsistence agriculture. The arrival of this particular vehicle thus effectively marked the beginning of mechanized agriculture in Iceland. Its buyers were two agriculture enthusiasts living in Akranes : merchant and shipowner Þórður Ásmundsson and ship captain Bjarni Ólafsson. 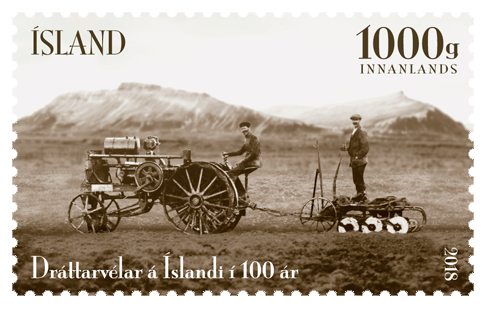 The Avery-type tractor, popularly renamed the Akranes tractor, had a 16 horsepower diesel machine, weighed about 2.5 tons and was 1.5 m wide and 3.5 m long. It hauled three ploughs but could also be made to haul various kinds of harrows or wagons, excavators and stream rollers, or even a potato-harvesting machine. Potatoes had been grown for a long time in Akranes and the tractor’s main assignment became the harvesting of the tubers.

Tractors were quite unknown in the Nordic countries before World War I. The Akranes tractor made its way to Iceland aboard the old passenger ship Gullfoss. John Sigmundsson, a West Icelander, was charged with assembling it.

This breakthrough in agricultural mechanization was at first met with relative mistrust and skepticism by most… In fact, the government, the Icelandic Agricultural Society and even the Alþing (Parliament) had refused to finance the tractor! But when the first reports of the tractor came and the machine proved to be fast and efficient, the matters changed…

Find out more about our September 13th issues here….