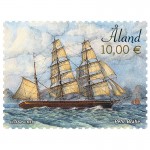 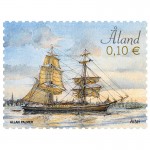 The six-year series started in 2015 with the issues featuring the schooner Lemland and the barquentine Leo. Captain and artist Allan Palmer made a comprehensive research to be able to illustrate the coming sailing ships Altai and Pehr Brahe in a genuine entourage.

The brig Altai was built in 1859 on Vårdö for a jointly owned shipping firm with several part-owners. Altai chiefly transported timber on the North Sea, and she yielded good profits until taken out of use in 1876. On the stamp, Altai lies at anchor outside the port of Copenhagen, a common destination for taking onboard provision and buying gear.

The barque Pehr Brahe was built in 1877 in Parainen for major shipowner Nikolai Sittkoff in Mariehamn. The barque is presumed to be the first actual deep sea ship from Åland and, sailing to Vladivostok and Nikolayevsk on the Pacific Coast in 1879, she became the first Åland ship to reach the Far East. Allan Palmer has depicted Pehr Brahe on a long eastward voyage with a certain sail panel with studding sail described in the ship’s logbook.

Stamps, FDC and maximum cards can be obtained from Åland Post Stamps webshop at www.posten.ax/webshop/en.