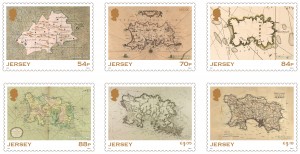 Six historic maps documenting Jersey’s cartographic history are to feature on a set of stamps to be issued by Jersey Post on 17 February 2021.

Known for its dangerous waters and interesting topography, people have been mapping Jersey for the past millennia. The six stamps depict a selection of maps, ranging from a very early map of Jersey produced by John Norden in 1595, to a tourist road map produced by Harry Clark in 1930.

The map imagery has been sourced from the Société Jersiaise in Jersey, the Priaulx Library in Guernsey and The British Library in London and was researched and selected with the assistance of Martin Morgan, author of A Cartographic History of the Channel Islands and founder of award-winning publishing house, Extraordinary Editions. Martin has always had an interest in maps and Extraordinary Editions specialises in publishing rare or unpublished historic material.

Martin says of the six maps selected for the stamps: “These maps are not just beautiful artworks, they were crucial in the development of the Island’s trading economy. They have also had a massive influence on how we see our Islands, not least Captain White’s epic survey on the £1.05 stamp which marks Jersey as we know her today and, for me, is the most important map in this set.”

The stamps have been created as part of a joint issue with SEPAC (Small European Postal Administrations Cooperations) entitled ‘Ancient Maps’ and the 70p stamp bears the SEPAC logo.

Jersey Post’s Historic Jersey Maps stamps will be available to buy from all branches of Jersey Post from 17 February 2021. Philatelic stamp products such as First Day Covers and Presentation Packs will be available from the Jersey post offices at Broad Street, St Helier and Rue Des Pres, St Saviour on issue day and can be ordered now at www.jerseystamps.com or by telephoning the Jersey Philatelic Bureau on: 00 44 (0)1534 616717.