Home › Uncategorized › 200 years of the kaleidoscope celebrated on Jersey stamps

200 years of the kaleidoscope celebrated on Jersey stamps 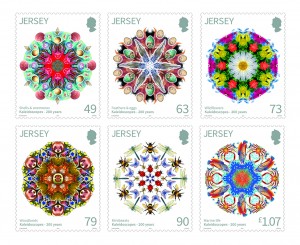 Six stamps celebrating the 200th anniversary of the invention of the kaleidoscope will be issued by Jersey Post on 10 July 2017. Illustrated by artist Mark Wilkinson, the stamps feature kaleidoscopic patterns inspired by the Island’s flora and fauna.

“As Jersey has such an amazing abundance of wildlife, we took the opportunity to showcase different aspects in a unique and interesting way, whilst commemorating the fascinating work of David Brewster, inventor of the kaleidoscope,” explains Melanie Gouzinis, Head of Philatelic at Jersey Post.

Scottish scientist, Sir David Brewster, patented the kaleidoscope in 1817. A prolific inventor, Brewster received numerous prestigious awards in recognition for his immense contributions to science, specifically optics. Whilst he has many inventions to his name including the binocular camera, lighthouse illuminator and lenticular stereoscope, his most enduring legacy is the kaleidoscope.

Illustrating the intricate patterns of a kaleidoscope to appear on the stamps was a challenging process as artist, Mark Wilkinson describes: “To design imagery inside a kaleidoscopic pattern of six segments was not as straightforward as I first thought it might be. Every element that sits on the edges creates a self-contained pattern that can be unexpected and occasionally obtrusive. After playing around for a while, it became easier to predict the symmetry.”

Each of the six stamps has been designed around a specific aspect of Jersey wildlife: shells and anemones, feathers and eggs, wildflowers, woodlands, minibeasts and marine life. 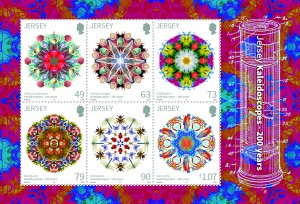 Jersey Post’s Kaleidoscope stamps will be available to buy from all branches of Jersey Post from 10 July 2017. Philatelic stamp products such as First Day Covers and Presentation Packs will be available from the Jersey post offices at Broad Street, St Helier and Rue Des Pres, St Saviour on issue day and can be ordered now at www.jerseystamps.com or by telephoning the Jersey Philatelic Bureau on: 00 44 (0)1534 516320.