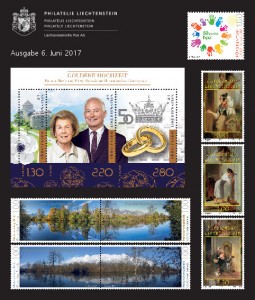 Golden Wedding of Prince Hans-Adam II and Princess Marie of Liechtenstein
On 30 July 2017, the royal couple in Liechtenstein, Hans-Adam II and Marie, will celebrate their golden wedding. To mark the occasion, an exclusive souvenir sheet with three stamps differing in size and value will appear: “Vaduz Castle” (value: CHF 1.30), “Royal Couple” (value: CHF 2.20) and “Crown” (value: CHF 2.80). The illustration by Angelo Boog was artistically depicted and underwent hot foil stamping in gold and silver, a pearlescent iriodin coating and multi-tiered embossing in a complex printing process.

50 Years of HPZ Schaan
“Colourful Diversity” (value: CHF 1.00) is the name given to the special stamp to commemorate the 50th birthday of the HPZ Remedial Education Centre of the Principality of Liechtenstein which also accurately describes the nature of the organisation. The HPZ targets people with special needs, offering them the HPZ school, a therapy centre, a place of work and for some, a home. In 1969, the institution’s success story began when the special-needs school and special-needs kindergarten were opened. Over the decades, an increasing number of educational programmes and therapies became available and new occupational workshops and residential groups were added.

Princely Treasures: Peter Fendi (1796-1842)
The Philately Liechtenstein is expanding its “Princely Treasures” series by adding three motifs from Viennese Biedermeier paintings. Austrian artist Peter Fendi (1796-1842) created the paintings “Request for Admission” (value: CHF 0.85), “Sneaking a Peak” (value: CHF 1.00) and “A Child’s Prayer” (value: CHF 1.50), each of which appear on a miniature sheet consisting of eight stamps. In the course of the artist’s life, he became one of the most sought-after portraitists of Vienna’s high nobility and left behind a very extensive oeuvre. He also played a pioneering role as a lithographer.

Nature Reserves in Liechtenstein
With a surface area of 1.53 hectares, Lake Gampriner Seelein was created during a flood of the Rhine River in 1927. In 1961, the scenic spot was declared a protected area by the government. Two panoramic photographs showing the lake from the same perspective once in autumn and once in winter continue the series of special stamps on the nature reserves in Liechtenstein. The photograph of the winter scene was taken by Sepp Köppel, the one in autumn by Xaver Roser. The two panoramic views were divided in the middle to create four stamps “Winter right”, “Winter left”, “Autumn right” and “Autumn left” (value: CHF 1.00 each). Both motifs are shown twice on a miniature sheet with eight stamps.

The new stamps are available from 6 June 2017 at all post offices and from Philately Liechtenstein. Internet: www.philatelie.li