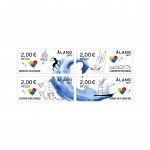 The franking labels are based on the graphic profile of the Åland anniversary year created by Annika Rehn Zetterqvist, and illustrate a few symbols that represent Åland and Ålanders’ willfulness.

Annika explains: “The biggest challenge was the limited space and the request that the motifs would fit together like a puzzle. There is no main symbol except possibly the sea, which of course cannot be ignored since we live on an island. Here, you find the important maritime history with both Pommern and the Lågskär lighthouse, but also the midsummer crown as a familiar symbol of Åland’s cultural history. The deer represents public Åland, while the swan is a flirt with Finland. The Åland creativity and nature interact in the dragonfly created from cutlery spoons by scrap artist Johan Karlsson. The berry with leaves underneath is the logo of Åland’s development and sustainability agenda. The Åland network Bärkraft (sustainability) has won EU’s sustainability award for having defined its own local agenda based on the UN’s global sustainability objectives. It suited the topic willfulness well, the courage to go your own way and create something of your own.”

In 2019, Annika Rehn Zetterqvist won the contest announced by the Åland Government to design a logo for the 100th anniversary, and she and her colleagues at the April communication bureau were commissioned to also create its graphic profile. 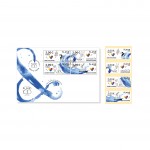