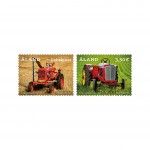 Tractors became increasingly predominant in farming during the 1930s and, when demand was greater than supply, the idea of converting cars into tractors was conceived. Such a tractor is exactly what you see on the first stamp. The car-tractor was built by Runar Karlsson on his home farm in Ringsböle, Jomala, in the early 1940s. His grandson Kristoffer Karlsson gives a detailed description of the construction of the tractor:

“The motor came off a Ford model A and the tractor was initially operated on wood gas. It was later retrofitted when gasoline became available. The frame is made from own-produced steel bark and the fenders from sheet metal. The radiator grille comes from a Chevrolet. The rear axle is probably from a Ford truck, while the front axle is from a Ford A but forged to obtain higher ground clearance. The tractor has two gearboxes, one of which acts as a high/low gear; grandpa took out a hole and mounted a pulley to obtain two different speeds.”

The other stamp shows a red 1956 Valmet 20. This tractor is located on the archipelago island of Sottunga. The owner, Raul Petrell, received it as a gift from his mother when he was 10 years old.

“It was the first tractor on the farm when I received it as brand new from the factory on October 14, 1956; it cost 384,500 old Finnish marks. For more than 10 years, I used the tractor in agriculture in front of the mower, among other implements, but also to run logs out of the forest”, Raul reminisces. 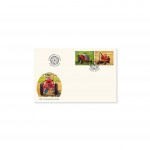 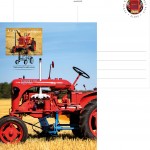 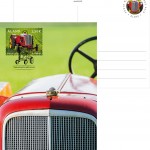