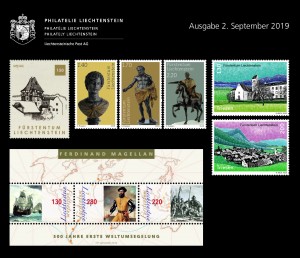 The special stamp “Red House” (face value: CHF 1.50) shows one Vaduz’s landmarks from a lesser known perspective. The issue is also Liechtenstein’s SEPAC stamp this year on the subject of “Old Residential Buildings”. In its present appearance, the Red House was built between 1902 and 1905, when sculptor and architect Egon Rheinberger connected the much older residential building with a stepped gable and the old wine press building with a round tower built according to his own plans.

The ownership of the Red House has been documented since the beginning of the 16th century. After belonging to a monastery for almost 300 years, it passed to the Rheinberger family from Vaduz in 1807, whose descendants still live there today.

A special block with three stamps is dedicated to the first circumnavigation of the world 500 years ago.

With the stamps “Victoria” (face value: CHF 1.30), “Ferdinand Magellan” (face value: CHF 2.80) and “Death in the Philippines” (face value: CHF 2.20), Philately Liechtenstein is commemorating the adventurous voyage of Ferdinand Magellan and his fleet. They pursued the goal of finding a western sea route to the Moluccas Islands in Southeast Asia. While the captain himself lost his life on an island in the Philippines, some of his crew succeeded in achieving this goal. The sailing ship Victoria was the only one of the fleet that completed the circumnavigation and returned to Spain in September 1522 loaded with precious spices.

With bronze sculptures from the collections of the Prince of Liechtenstein, Philately Liechtenstein is continuing its popular multi-part series “Princely Treasures”. The three objects by Italian sculptor Pier Jacopo Alari-Bonacolsi (c. 1455 to 1528) each fit on a miniature sheet of nine stamps: The “Bust of a Young Man” (face value: CHF 1.40), “Hercules with a Lion’s Skin” (face value: CHF 1.70) and “Equestrian Statue of Marc Aurel” (face value: CHF 2.20). The artist, known by his nickname Antico, saw his life’s work as being the revival and preservation of the sculptural art of antiquity.

Village View of the Oberland: Triesen

A new series with village views depicting all the local communities of the Liechtenstein Oberland begins with the community of Triesen. The stamp “Old Village Centre” (face value: CHF 2.00) shows the community with around 5,200 inhabitants embedded in a typical Liechtenstein landscape between the mountains and the Rhine. The second stamp focuses on the “Lady Chapel Triesen” (face value: CHF 1.30). It was first mentioned in writing in 1415 as the “Chapel of the Virgin Mary in the Village of Triesen”.

The new stamps are available from 2 September 2019. www.philatelie.li