Home › Uncategorized › An Icelandic stamp awarded the Ecology Prize for 2013

An Icelandic stamp awarded the Ecology Prize for 2013

Iceland Post was recently awarded the Ecology Prize for the year 2013 at the 44th Asiago International Award for Philatelic Art.

The prize has high patronage of the President of the Republic of Italy, and was presented during a ceremony in the Council Hall of the Municipality of Asiago (Vicenza, Italy) on Sunday, 6 July 2014.

The award-winning stamp, 585A – International Year of Water Cooperation –  was designed by Borgar Hjörleifur Árnason and issued on 24th January 2013. 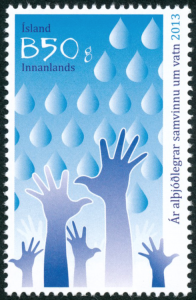 “With elegant, clear and unequivocal graphics, the stamp represents arms stretched out to the skies, as in an invocation of thirst for life. Raising awareness is everyone’s concern, and a new commitment the first duty of all.”

585 A was designed after the United Nations‘ General Assembly had declared the year 2013 the International Year of Water Cooperation, the purpose being to raise general awareness about the possibility of increased cooperation on this precious resource.

Icelandic institutions and non-profit organizations have been involved in international relief efforts, which include digging wells to provide water for people in drought areas. The Icelandic International Development Agency (ICEIDA) has been working in several countries drilling for water and digging waterwells. The Youth Organization of the National Church has also been actively involved in the relief effort, for instance in Malawi w here with the assistance of the Icelandic Church Aid, residents have been digging wells and installing waterwell pumps, thereby gaining better access to clean water.

You can find the stamp here