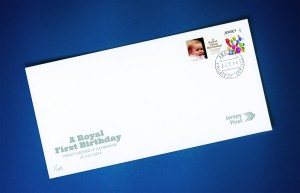 A Royal First Birthday – The Limited Edition Commemorative First Day Cover is a beautifully printed envelope displaying the Jersey Moments balloons stamp affixed to a stamp label. The stamp label features a close-up photograph of the Prince of Cambridge as he arrived in Wellington, New Zealand at the start of his first Royal Tour, taken by award-winning royal photographer, Mark Stewart.

Jersey Post’s Philatelic Production Co-Ordinator, Chris Elligott said, “Jersey Post is delighted to wish Prince George a very happy first birthday and we’re sure it will be a wonderful occasion for both the young Prince and his parents, the Duke and Duchess of Cambridge.

“Our special Commemorative First Day Cover is an ideal way for Jersey to mark the future British Monarch’s first year. The colourful balloons stamp from our popular Jersey Moments range is perfect for a celebration and, together with the charming photograph of the Royal baby, a lovely way to commemorate the event.”

The issue is strictly limited to 1,000 individually hand-numbered copies, each containing a card with information about Prince George of Cambridge’s eventful first year. The stamp and label will be cancelled with a Jersey Post postmark dated 22 July 2014.

The First Day Covers will be available from the Philatelic shop in Broad Street on Tuesday 22 July, priced £9.95 and can be ordered now at: www.jerseystamps.com or by phoning the Jersey Philatelic Bureau on: 00 44 (0)1534 616593.