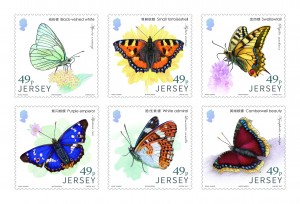 Butterflies that have been recorded in both Jersey and China will feature on a set of six stamps to be issued by Jersey Post on 1 September 2017. Norwegian stamp artist, Martin Mörck, was again commissioned to collaborate with Chinese designer Wang Huming to produce six illustrations for the third instalment in a series looking at Jersey’s natural links with China.

Melanie Gouzinis, Head of Philatelic at Jersey Post explains, “Jersey continues to develop its relationship with China both in terms of business and educational opportunities. Once again, we have used our stamp designs to explore some of the more simple aspects of everyday life and this year the focus is some of the butterflies that have been recorded in both Jersey and China.

“Colourful and captivating, butterflies often enrich the lives of onlookers and bring a feeling of peace. An abundance of different species is a good indication of the health of the countryside they are visiting.” 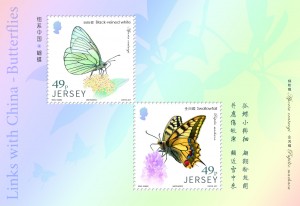 Jersey Post’s Butterflies stamps will be available to buy from all branches of Jersey Post from 1 September 2017. Philatelic stamp products such as Souvenir Miniature Sheets, Souvenir Sheetlets, First Day Covers and Presentation Packs will be available from the Jersey post offices at Broad Street, St Helier and Rue Des Pres, St Saviour on issue day and can be ordered now at www.jerseystamps.com or by telephoning the Jersey Philatelic Bureau on: 00 44 (0)1534 516320.